Following the unveiling of the Asus ROG Phone 6 series, Nubia has launched its own Snapdragon 8+ Gen 1-powered gaming phones. The newly announced Red Magic 7S series is the “slight” upgrade over the original lineup launched in February. In this article, we will be discussing the specs, features, expected price, and availability of the Nubia Red Magic 7S and 7S Pro in Nepal.

Red Magic 7S and 7S Pro are mid-year refreshes, and thus, do not boast significant upgrades or changes. The most noticeable change in Nubia’s latest gaming phones comes in the form of the chipset. Here, the company has turned to Qualcomm’s latest flagship offering. The transition from Samsung to TSMC’s 4nm process means the new chip is 30% more power-efficient as well. Furthermore, it supports the latest LPDDR and UFS standard, which Nubia has utilized.

For instance, Nubia claims the Red Magic 7 and 7 Pro can average 59.7 fps and 120 fps in Genshin Impact and Honor of Kings with a standard deviation of 0.4 and 0.3, respectively.

It all because of the improved ICE Magic Cool technology, which is now in its ninth generation. RedMagic 7S series makes use of both active and passive cooling methods. 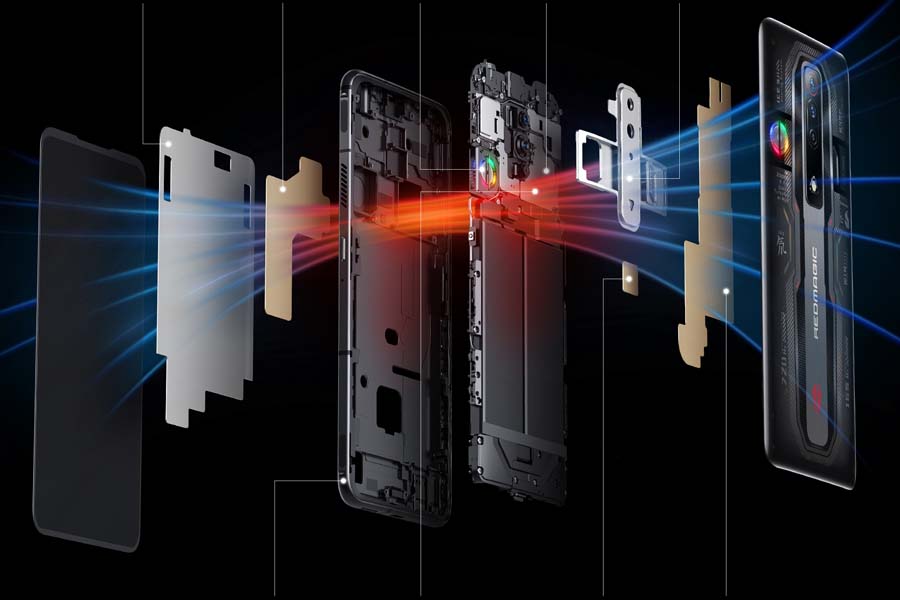 At the heart of the Red Magic 7S series’ cooling system is a centrifugal fan of 20000 RPM. It works alongside the shark fin vortex air duct, graphene + n-hexane phase change material, and vapor chamber to keep the core temperature of the phone in check.

On the right-hand side of the Magic 7S series, Nubia has included two shoulder buttons that can be programmed for different in-game functions. The keys have independent ICs and boast sampling rates of 520Hz.

Gamers can project gameplay from the Red Magic 7S and 7S Pro to a bigger screen. The new Red Magic 7S series supports 120fps wireless projection of up to 120fps. 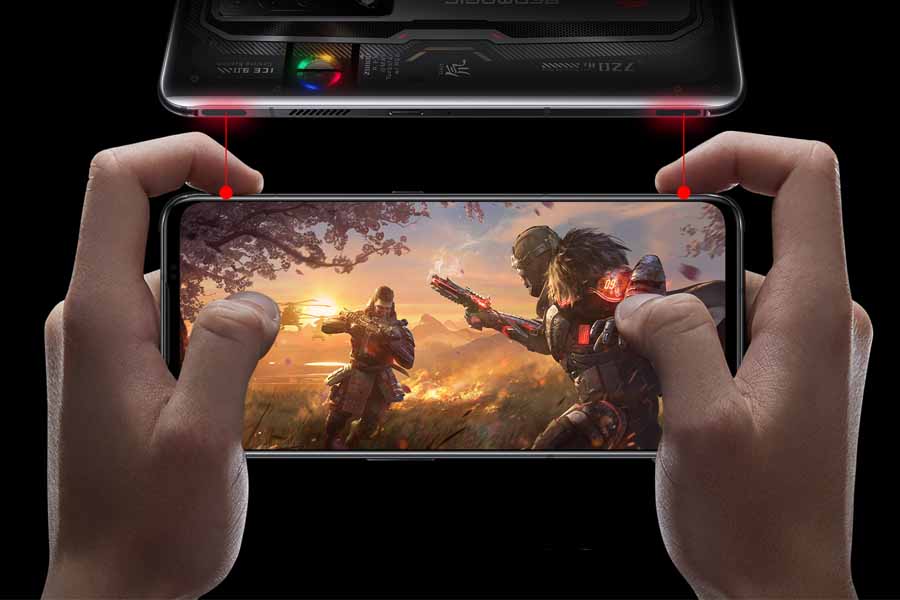 Moreover, you can connect a keyboard and a mouse directly to the phones and have a PC-like gaming experience. Users can even livestream their game along with facial capture.

Nubia Red Magic Series features stereo speakers with DTS and Snapdragon Sound. Furthermore, it has a 3.5mm headphone jack and a three-mic setup.

Nubia Red Magic 7S and 7S Pro feature the same-sized screen as their predecessors. You are looking at a 6.8-inch FHD+ AMOLED screen with 10-bit color depth and DC Dimming.

Still, you can tell between the two phones by observing the top bezels. The regular Red Magic 7S has bigger bezels as it has to house a selfie camera. The Pro gets away with an in-display selfie camera and thinner bezels.

Moreover, the regular 7S refreshes at 165Hz, whereas the Pro model is restricted to just 120Hz.

Nubia Red Magic 7S and 7S Pro also differ in battery sizes. The vanilla model has a 4,500mAh battery, whereas the Pro model has a bigger 5,000mAh cell. The supported charging speeds are 120W and 135W, respectively. Nubia ships the phones with a 165W GaN PD charger that you can use to charge laptops and other accessories.

Cameras are not really a priority for gamers. As a result, Nubia has decided to keep it unchanged from the Red Magic 7 and 7 Pro. Likewise, both these devices will utilize new wireless standards like WiFi 6E and Bluetooth 5.2 for wireless communication.

Nubia Red Magic 7 series is currently available in China where the regular models start at CNY 3,999 and the Pro model at CNY 5,199. The phones are set to launch globally as well. However, we don’t have an exact date for that. If Nubia launches them in Nepal, we expect the price of the Red Magic 7S and 7S Pro to start at NPR 79,499 and NPR 102,499, respectively.