Asus has finally unveiled its ROG Phone 6 series. The lineup consists of a regular Phone 6 and a Pro model, the first gaming phones to come equipped with the Snapdragon 8+ Gen 1 chip. In this article, we will be discussing the official specs, features, expected price of the Asus ROG Phone 6 and 6 Pro in Nepal.

As mentioned earlier, the ROG Phone 6 and 6 Pro are the first gaming phones to feature Qualcomm’s latest flagship chipset. The Snapdragon 8+ Gen 1 on these phones is based on TSMC’s 4nm process, resulting in better performance than the regular 8 Gen 1 while also being power efficient.

According to the company, the new chip boasts a 15% faster CPU and a 50% faster GPU than the Snapdragon 888 on the ROG Phone 5. Furthermore, it is also 20% power efficient. Asus has paired the chip with LPDDR5 RAM and UFS 3.1 storage. The regular Phone 6 can be configured with up to 12GB RAM and 512GB storage. On the other hand, the Pro model is available in a sole 18GB RAM variant.

Asus says the new thermal compound has 200% better heat conductivity than the last-gen solution, and just 3,300 milligrams of it can lower the CPU temperature by 10° Celsius. It drives the heat away from one side of the CPU, reducing thermal throttling, and is most effective during short gaming sessions.

For longer gaming sessions, ROG Phone 6 and 6 Pro have an enlarged vapor chamber (30% larger) and an 85% larger graphite sheet.

However, if you want the best performance possible out of the new gaming phones, you will have to spend some extra bucks for the AeroActive Cooler 6. It is an active cooling solution with a Peltier cooling element that snaps at the back of the phone just over the Snapdragon 8 Gen 1+. With AI cooling mechanism, it can lower the phone’s surface temperature by up to 25° Celsius. In addition to being a cooler, AeroActive Cooler 6 even adds 4 physical buttons for extra controls.

Talking about controls, the ROG Phone 6 series phones come with a lot of options. As with their predecessors, ROG Phone 6 and 6 Pro come with 2 ultrasonic buttons. They now support new forms of gestures such as Dual Action, Press and lift, and Gyroscope aiming. The latter is said to help MOBA gamers as it helps users scan their environment by simply tilting the phone.

Users can even buy the Kunai 3 gamepad separately for a more console-like gaming experience. 3 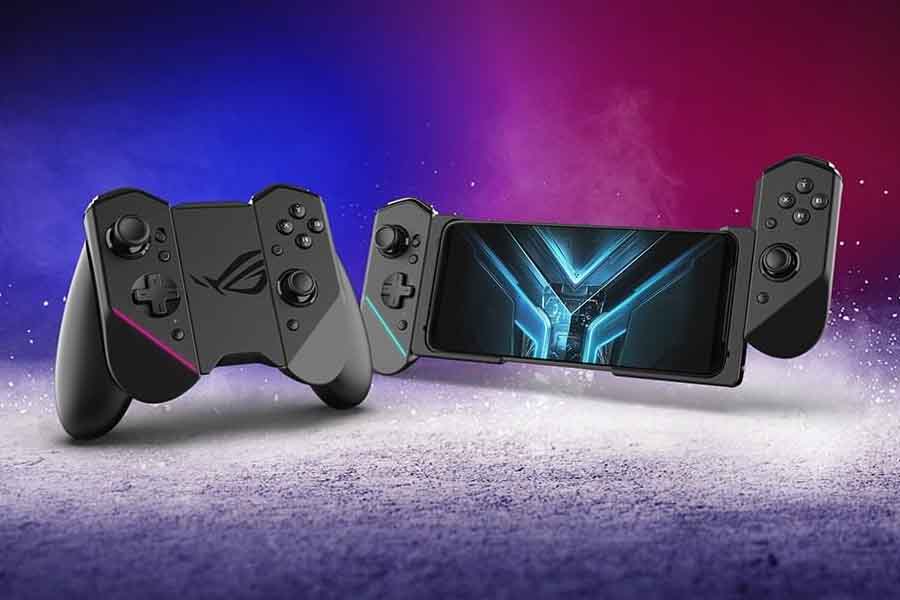 Furthermore, the X-axis motor on the Asus ROG Phone 6 series has been improved by 80%. It now supports vibration frequency of up to 130Hz and is 20% more power-efficient as well.

Talking about the design, Asus is sticking to its principle of no notch and no punch-hole for its gaming phone. ROG Phone 6 series continue to sport traditional design with bezels.

Maintaining the Cyberpunk aesthetics, Asus ROG Phone 6 is available in Storm White and Phantom Black color option, whereas the latter is not an option on the Pro.

One way to distinguish the Asus ROG Phone 6 Pro from its sibling is to look at the back. The Pro model features a second display at the back, whereas the ROG Phone 6 only has an RGB strip.

In addition, Asus is touting the Asus ROG Phone 6 as the first splash-resistant gaming phone as the phone will have IPX4 rating.

Fueling the Asus ROG Phone 6 is a massive 6,000mAh battery. Both ROG Phone 6 and 6 Pro support fast charging of up to 65W. The two phones have two USB-C ports, so you can play games even with them plugged into a charger. You can even cast the phone to a bigger screen using a USB-to-HDMI cable on the side charging port.

You get two front-facing speakers on ROG Phone 6 and 6 Pro, backed by Dirac. There is even a 3.5mm headphone jack that you won’t find on mainstream flagships these days. The phone even supports Lossless audio thanks to Snapdragon Sound and aptX Adaptive codec.

It may not hold much significance to hard-core gamers, but the ROG Phone 6 series features a triple camera setup consisting of a 50MP primary, 13MP ultrawide, and a 5MP macro sensor. There is even a 12MP selfie camera on the front. The phones run on Android 12 out of the box with ROG UI on top.