Redmi has launched three devices under the latest Note 11 series in Nepal. We have already covered Note 11 and Note 11 Pro (4G/5G) in detail, and in this review, I will be talking about the Redmi Note 11S. This phone is the middle ground between the rest of the series, both in terms of price and features. Before we begin our review, let’s take a quick look at the specs sheet of the Redmi Note 11S.

With that out of the way, let’s get this review started, beginning with the design. Like the rest of the series, Note 11S sports a boxy design, characterized by its flat frames and rounded corners. Then you have the two-tier camera bump at the island at the back one, like the one we saw on the Note 11 Pro.

The Redmi Note 11S resembles its higher-end sister in appearance. But once you hold them in your hands, it is not difficult to tell the difference. Redmi Note 11 Pro feels a lot more premium because of its glass back.

Although Xiaomi claims that the Redmi Note 11S’s rear is also made of glass, it’s hard to make out from the phone itself. Weighing in at 180 grams, it’s way lighter than the Note 11 Pro and doesn’t quite have the heft of a glass.

A hammer would be a sure way to test it, but I’m not willing to take such chances. Even if it’s indeed glass, I will say it fails to add to the premiumness of the phone, which I believe is the whole point of having a glass back.

While the Note 11S may not feel more premium, it is unquestionably more comfortable to hold. It’s lighter, with a gently curved back panel for a better ergonomic grip. Furthermore, the phone is IP53 water resistant with a rubber gasket on the sim tray, which by the way, can hold two SIMs and a microSD card.

All the keys are on the right and well within reach. The power button even doubles as a fingerprint scanner, which offers a fast and accurate way to unlock the phone.

On the front, there’s a 6.43-inch AMOLED display with a camera cutout in the middle. The display specifications are quite similar to what we got on its predecessor – Redmi Note 10S. However, Redmi has optimized the colors better on the Note 10S.

As I recall, consuming multimedia on Note 10S was far from a pleasant experience. The phone would often boost contrast and add artificial details via sharpening during video playback.

Thankfully, that is not the case with its successor. With the Vivid display mode, I found the colors and contrast to be on point most of the time.

In addition, you do get Widevine L1 certification, enabling you to stream HD content off Netflix and other streaming platforms. Couple that with stereo speakers, you won’t be disappointed with the multimedia experience on this phone. Sure, you should not expect punchy bass with this audio setup, but for the price, you cannot complain much.

I’m also quite impressed with the phone’s implementation of a 90Hz refresh rate. You won’t experience many micro-stutters when navigating through UI or switching between apps. Everything feels smooth and the phone even dials back to 60Hz whenever it detects static content.

Needless to say, this feature contributes to the overall battery endurance of the phone. In my time reviewing the phone, Redmi Note 11S averaged a day of backup with each full charger. I normally use my phone for social media and media consumption with a few casual gaming sessions in between. Even so, the phone would require recharging only at the end of the day. With the 33W charger included in the box, the phone gets from 0 to 100% in a little over an hour.

Now, let’s talk about the performance. So, if you look at the recent market trend, brands are going for power-efficient chips. In this regard, Snapdragon 680, built on a 6nm process, has almost been a go-to chip in the sub-30K price segment. It even features on Note 11. However, this chip doesn’t impress with its raw performance.

Thus, if you prefer raw performance over power efficiency, you would be better off with Helio G96 that is powering the Note 11S. Not only does this chip boast better raw performance, it is also better optimized for mobile gaming.

While playing PUBG: Mobile, you can bump the refresh rate to Ultra with graphics set to Smooth. The game averages 40fps for the most part, except for some dips here and there. 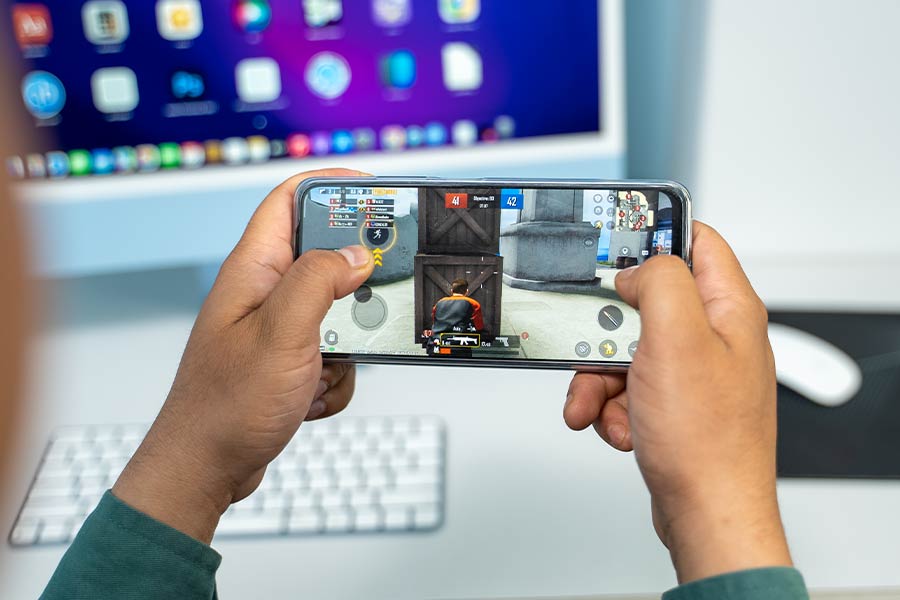 Likewise, Redmi Note 11S also supports 90fps mode on Critical Ops. This option is not available on most Snapdragon 680-powered phones as they usually max out at 60 fps.

But since it is a mid-range phone, the cooling setup is not going to woo gamers. Redmi has included layers of graphite and copper as part of its LiquidCool technology, but it fails to keep up with the heat generated from long gaming sessions.

The phone gets warm around the camera bump and you will notice frequent frame drops. So, if you plan to play games for longer, I recommend dialing down the graphics settings accordingly.

It won’t be an issue if you are a casual gamer like me. The phone can handle all of your day-to-day tasks with ease. You can even switch between apps without much hiccups. However, if you return to an app after leaving it for more than a few minutes it will require a reload. But it is the same with most phones in this segment, so no worries.

I also like how Xiaomi has improved haptics on its budget and midrange phones over the years. As evident in Note 11S, it no longer feels cheap and is actually better than some of the competition.

During calls, voices were crystal clear at both ends. However, I found the proximity sensor not working as intended. Turns out, Xiaomi has used a virtual sensor that works based on the phone’s orientation and movement instead of physical proximity.

It feels weird to me that the company is still using a virtual sensor after all the debacle with the Note 10 Series last year. As for software, Redmi Note 11S boots on Android 11, which is a little underwhelming as Android 13 is already around the corner.  There is no sure way to tell when and if it will get any software update. Maybe Xiaomi should take some notes from Samsung in this regard.

Like the rest of the series, it runs on Xiaomi’s custom MIUI 13, but without any Android 12 features. The bloatware is not as bad on the Note 11S as it used to be with Redmi devices in the past and you can uninstall most of it.

But I would say, the company should offer an option to choose Google Discover instead of App vault to the left of the home screen. I believe many would prefer the former over the latter as I do.

Anyways, let’s get into the photography side of things. Note 11S is the cheapest phone from Xiaomi to don a 108MP camera. However, it does leave much to be desired when it comes to computational photography as you can find inconsistencies in the photos.

You could argue that it’s hard to find a good “camera phone” in this price and I kinda agree as well. But again, I compared Note 11 with another 108MP camera phone in Realme 9 and I still found the former lacking in one way or the other.

Just look at these photos side by side. I know even Realme 9’s photos are not anything to write home about. However, they are better in most instances. They are more pleasing compared to Note 11S, despite the saturated colors. Most of Note 11S pictures are heavy on contrast and over sharped.

There is no clear winner when it comes to portrait as both phones fail to preserve the natural color tone of the subject. Realme tends to add reddish tint to portraits whereas the subject looks too pale on Note 11S.

Ultrawide shots from Note 11S lack dynamic range and look almost lifeless. Realme on the other hand has poppy colors though it is not any better when it comes to details.

Both phones struggle to retain details under low light even with the Night Mode. Even so, Realme 9’s pictures look comparatively better because of saturated colors.

As for selfies, both phones are equally terrible, so I would not recommend any of them here.

Portrait (Normal and Portrait)
1 of 12

Moving on, you can record 1080p 30 fps videos both from the rear and front-facing cameras on the two phones. However, there is not much to talk about video quality and stability.

Honestly, this year has not been that good for the budget segment with brands nerfing their newer models in one aspect or the other. In Note 11S, it’s the Mali G57 GPU which is a step down from Note 10S’ quad-core Mali G76. There is no 4K recording as well.

However, if you overlook these minor details, Redmi Note 11S is actually a decent mid-range phone for 2022, especially for multimedia consumption. It could have been better with some camera and software optimization.

Still, there are some good alternatives if you have a little room to wiggle in your budget. The first suggestion would be the Note 10 Pro, which is marginally expensive but offer a 120Hz screen, a more premium design, and optimized cameras.

You can also go with the latest Note 11 Pro 5G (Pro+ 5G in India) if you want 5G connectivity as well. There is also Poco X3 Pro for guys that really don’t care about AMOLED screen and want the best performance possible.