Samsung Nepal hosted an online bloggers’ meet today to announce the arrival of the Galaxy F22. It is the first and only F-series smartphone to launch in Nepal so far. The device is quite similar to the A22 but comes with a few notable differences. So, let’s get into the specs, features, official price, and availability of the Samsung Galaxy F22 in Nepal.

Galaxy F22 is built around a 6.4-inch Super AMOLED display. Here, Samsung has included a 90Hz refresh rate but has scaled down the resolution to just HD+. Similarly, the phone has an Infinity-U notch which looks quite dated for 2021. 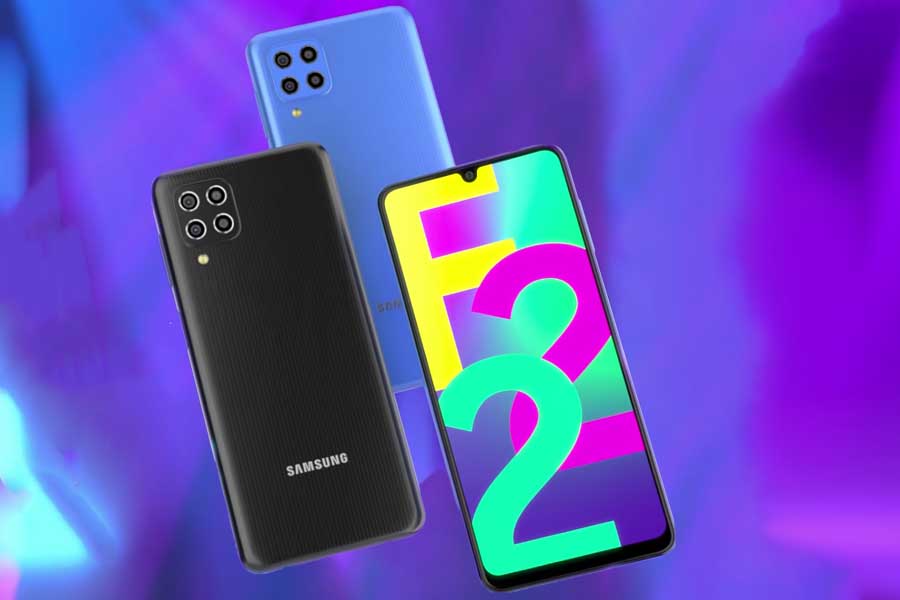 At the back, we get to see the prismatic design that we have seen in recent M-series devices from the company. There is a square camera bump with an LED flash just outside of it. Galaxy F22 is available in three color options: Denim Blue, Denim Black, and White.

As mentioned earlier, the phone has MediaTek Helio G80 running the show. Lately, Samsung has pumped out several devices with the same chipset, including Galaxy M32, A22 4G, and A32 4G. This particular silicon features two Cortex-A75 (@2.0GHz) and six Cortex-A55 (@1.8GHz) CPU cores.

Galaxy F22 is available in two RAM variants – 4GB and 6GB. These arrive with 64GB and 128GB of internal storage, respectively. You also get a dedicated microSD card slot that allows you to expand the storage up to 1TB.

A 48MP primary camera leads the quad-camera setup at the back. Unlike the A22, this one doesn’t have Optical Image Stabilization (OIS). Apart from this, there is an 8MP ultrawide sensor with a 123º Field of View (FOV). Completing the setup are two 2MP sensors for portrait and macro shots, respectively. The rear camera supports a number of different shooting modes, including AR stickers, Hyperlapse, Slow motion, Food mode, and Pro mode. There is a 13MP camera up front for selfies and video calls. Interestingly, F22 supports Night Mode photos from the primary, ultrawide, and even the selfie camera.

Likewise, Galaxy F22 ships with a 6000mAh battery and a 15W charger inside the box. However, it also supports 25W fast charging. The device boots on Android 11-based One UI 3.1 (Core) out-of-the-box. Samsung Nepal has guaranteed 2 years of Android upgrades and 4 years of security updates here. There is a side-mounted fingerprint scanner on the side for biometrics.

The price of the Samsung Galaxy F22 in Nepal is NPR 20,499 and NPR 23,999 for the 4/64GB and 6/128GB variants, respectively. It is already available for pre-order from Daraz while the actual delivery will start from July 27. Galaxy F22 will be available in Samsung authorized retail stores across Nepal too.