Last year’s Galaxy F22 was not perfect by any means but it was a decent offering nonetheless. And today I have its successor the Galaxy F23 for review, which is also known as the Galaxy M23 in some regions. Before we start our review, let’s take a quick look at the official specs of the Samsung Galaxy F23 5G.

I got this phone from Flipkart for INR 16,000 for the 6/128GB variant. At that time there was some introductory offer going on, but right now it is priced a INR 1,000 more. At this price segment, this is the first phone not to come with a charger inside the box. Galaxy F23 comes in this slim box, which houses the phone, a Type-C to Type-C charging cable, a user manual, and that’s it.

So, the “INR 17,000 price tag” is kind of a delusion because you have to buy a 25W brick separately, which costs around 1500 Indian rupees. So, the effective price of this phone is actually INR 18,500. Anyway, let’s start the review of the Galaxy F23 with the design side of things.

Here, for the most part, Samsung has nailed the rear look of this phone. I’m in love with the Aqua Blue variant that I have—whereas the company hasn’t gone overboard with the camera island either.

The phone has Gorilla Glass 5 in its display too, but that’s about it when it comes to protection. There is no official IP rating here and it doesn’t have a rubber gasket in the SIM tray either—which by the way—accepts two SIMs and a microSD card.

But I do appreciate the fact that Samsung has made the Galaxy F23 both lighter and thinner. As a result, you will have no problem carrying it around in your pocket. Samsung is also sticking with curved frames whereas other brands have started experimenting with flat edges in this arena.

Personally, the curved edges feel more at home to me. The fingerprint scanner is right where I like it and it is quite fast and accurate for the most part.

Likewise, you’ll find all the ports on the bottom. This includes a 3.5mm headphone jack, a Type-C port, and a single down-firing speaker.

As good as it sounds, I was expecting stereo speakers on the F23 since that’s getting pretty common in this price range.

Similarly, another aspect where the Galaxy F23 should be criticized is its TFT LCD screen. And I’m kinda on the fence on this one really.

Here, Samsung’s decision to go from a Super AMOLED to an LCD panel is kinda dumb, given how it was among the best things about the Galaxy F22.

I think they should have provided a 90Hz Full HD AMOLED display here. Sure, this 120Hz refresh rate feels quite smooth and it has fared well in my usage without many jitters. However, I would have had no problem settling for a slightly lower refresh rate if it was an AMOLED panel instead.

That being said, I don’t think it’s absolute trash of a display as the “TFT” name paints it out to be. Obviously, it doesn’t match the colors of an AMOLED screen and the blacks appear greyish here. But it’s the same for any LCD panel, even the IPS one that many believe Samsung should have opted for.

This sheds light on all the confusion among users regarding smartphone display technologies. Here, TFT stands for Thin Film Transistor and it’s the core technology of major LCD screens, including the IPS ones.

However, over the years, the term TFT has been used to refer to Twisted Nematic TN panels, which are generally known to have inferior colors and poor viewing angle compared to IPS.

As with the F23’s TFT panel, I didn’t face either of these issues and I guess that Samsung is using a TFT Plane-In Switching PLS panel here, which is its alternative to the IPS standard that delivers a wider viewing angle, brighter contents, and better image quality.

I also faced no problem streaming contents off Netflix and Prime Video on this phone. It supports HD playback on both of them, though there is no HDR support. Outdoor visibility is strictly average though, so you will struggle a bit when looking at this screen under direct sunlight.

As for battery endurance, the phone easily lasted me over a day on normal usage, which includes scrolling through social media apps, multimedia consumption, and a fair amount of photography. However, because of the power-hungry 120Hz refresh rate and LCD display, the battery endurance isnt as good as say the Redmi Note 11.

So, I often found myself reaching out to the charger at the end of the day when adding casual gaming to the mix. Using the 25W official charger, the F23’s 5000mAh battery took 1 hour and 25 minutes to go from 0 to 100%.

Let’s now talk about the performance. Here, Samsung has gone with the tried-and-tested Snapdragon 750G. While it is not based on a more power-efficient 6nm process like the now popular Snapdragon 680, it is a lot more powerful than the 680.

Remember I said tried and tested? That’s because this chip has been on the market long enough for game developers to optimize their games. As a result, you can push most mainstream titles to their higher settings here, unlike the new Exynos 1280 on Samsung’s latest mid-rangers. However, you’ll want to dial down the settings for stable gameplay.

For instance, you can get a stable 30 fps gameplay on PUBG under the default settings. But when switching to Smooth graphics and Ultra frame rates, I noticed a few frame drops here and there, although it remained at 35 – 38 fps on average. 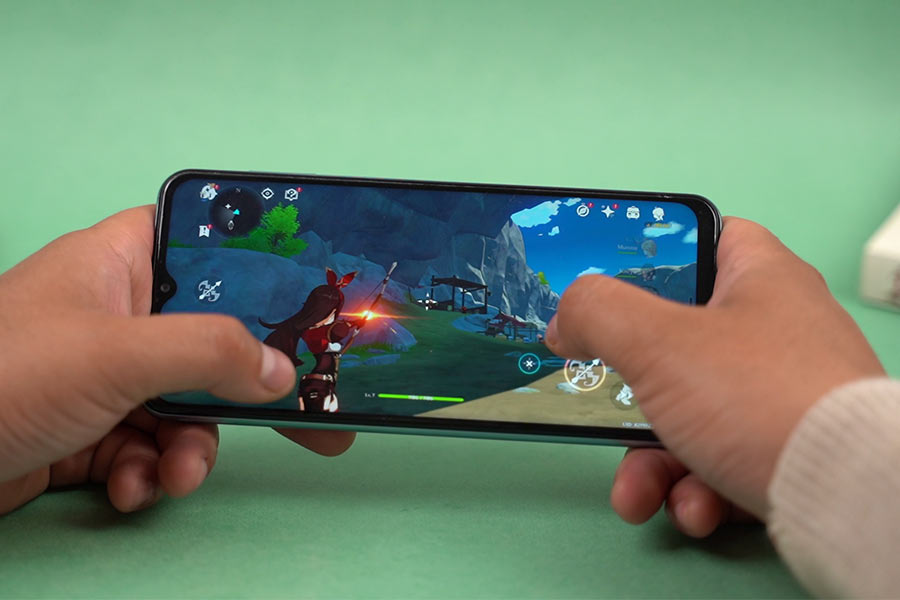 Likewise, I found High graphics and High frame rate to be the most optimum settings for COD Mobile.

However, the Galaxy F23 has trouble running graphics-intensive games like Genshin Impact. At Low settings, the phone delivers around 24 fps on average at first but it drops to roughly 18 fps after a while into the game.

As you’d imagine, the phone got warm pretty fast here, where I recorded the surface temperature around the camera bump at 40°C.

Moving on, like many of the new Galaxy phones so far, the F23 5G boots on Android 12 with One UI 4.1 out of the box. Samsung even promises 2 years of software updates and 4 years of security patches for the F23, by the way. And unlike its predecessor which ran on One UI Core, you are getting the full-fledged One UI here. Anyway, as much as I love Samsung’s custom skin, the bloatware situation on this phone is rather disappointing.

I also find it weird that the Galaxy F23 has “Glance” as the default lock screen wallpaper service provider instead of Samsung’s in-house solution. Especially since some of Glance’s wallpapers are straight-up ads!

I know a lot of you are eager to know about F23’s cameras—so let’s get right to it. Well, it is among the best camera setup in the segment, no surprises there! Even though its 50MP ISOCELL JN1 primary camera isn’t necessarily unique, what makes it stand out is 750G’s superior Image Signal Processor and Samsung’s color optimization, which I personally love.

Compared to the more expensive Galaxy A23, I found that it holds its ground quite well. In general, photos from the F23 come out with good colors, contrast levels, and dynamic range. Similarly, I didn’t face any problem with Auto HDR here like with other mid-range phones in the past.

And there’s not a significant color shift when switching from the primary to the ultrawide camera on the F23 either, while its ultrawide shots have a pretty good dynamic range as well.

Primary vs Ultrawide
1 of 6

Background separation on portraits is decent too, although the subjects look somewhat warm.

Getting to nighttime shots, the F23 unfortunately shoots pretty dark and grainy photos—where it tries to maintain close-to-natural colors. Turning on night mode does brighten up the shot a bit but it doesn’t necessarily improve in terms of noise and detail levels.

Nighttime vs Night Mode
1 of 6

Likewise, selfies from the 8MP front-facing camera have this slight reddish tint. Other than that, its dynamic range is sort of hit or miss as well.

In terms of videos, F23’s rear camera can shoot at up to 4k 30 fps. In most cases, I found that ts videos are usually steadier compared to the Galaxy A23, but it’s nothing to write home about. The selfie videos here cap out at 1080p 30 fps and as you can see, it crops into the frame, whereas I can’t help but notice the weird bluish tint here either.

So, Wrapping up this review, the Samsung Galaxy F23 5G is a pretty decent mid-range phone for the price. I really like its primary camera, the design, and its overall performance. Also, Samsung’s software game in the mid-range segment is simply unmatched. So if those are your priorities, it’s definitely a good choice for you.

But if you are someone who watches a lot of movies, you might want to get something like the Redmi Note 11 Pro 4G which comes with a quality AMOLED screen and a fast 67W charger inside the box.