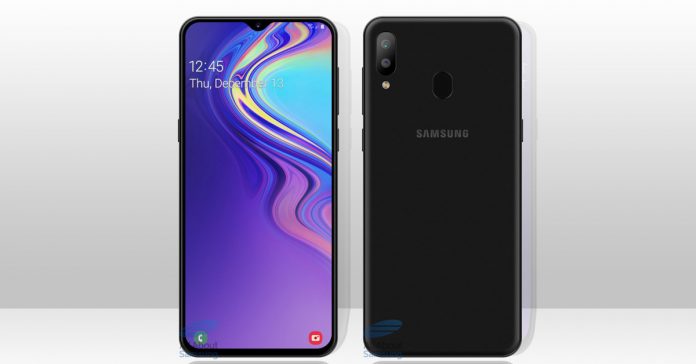 Lately, we have been hearing a lot of rumors and speculations about Samsung’s M-series and A-series smartphones. The M-series is said to consolidate C, J, and On lineup of smartphones, which are renowned for their budget-friendly nature. Similarly, the A-series will of midrange and semi-flagship standards. And the recent rumors suggest that the Samsung Galaxy M20 would initiate this change in moniker.

As per the report, Samsung Galaxy M20 won’t feature anything new or quirky. The three-camera setup and side-mounted fingerprint on the Galaxy A7 2018 and the quad camera at the back on the Galaxy A9 2018 weren’t that successful in the smartphone box office. And this time, Samsung seems to be cutting down all the gimmicks. AllAboutSamsung website from Germany reported that the Galaxy M20 (SM-M205) will feature a whopping 5000mAh battery. If the handset features that amount of battery, the M20 would be the first ever Samsung smartphone to flaunt that massive battery.

Samsung has also been ignoring the notch trend all along. To increase the screen-to-body ratio of the display, it came with a punched-hole display on the Galaxy A8s rather than a notch. However, this time Samsung seems to adopt the notch. And looking at the image, we can clearly see a water drop or dewdrop style notch. Well, this may be the Samsung’s new Infinity-U display but we will have to wait for its official launch to confirm it.

On its notch, the Smartphone giant has housed an 8MP camera surrounded by other necessary sensors. And on the back, there is a dual camera setup and a fingerprint sensor. Dual camera setup is conspicuous on the image. And the leakers suggest that the camera duo comprises of 13MP and 5MP sensors.

The German website also quoted the precise dimension of the device at 156.4 x 74.5 x 8.8mm. However, the size of the display is still under the unveil. But some rumors suggest that the device would feature a 6.0-inch Full-HD+ display. Since the mid-range phones of 2018 like Galaxy J8 and Galaxy J7 Duo had fairly disappointed us with an HD display, we would be happy if it features Full-HD resolution.

On the performance front, Samsung Galaxy M20 is expected to come with Exynos 7885 chipset along with 3GB of RAM. We had seen this processor on the Galaxy J7 Duo, Galaxy A7 2018, and the A8 Plus 2018. And the performance was great on those devices. So if the handset comes with Exynos 7885 chipset, Samsung might receive tons of praises from its fans. And talking about the storage, the handset would come in 32GB and 64GB variants.

When the rumor about the phone was going wild, we also got some information about its availability. We learned that the handset would first hit on the UK, Germany, France, Poland Scandinavia. However, there is if the phone would be available the countries other than that.