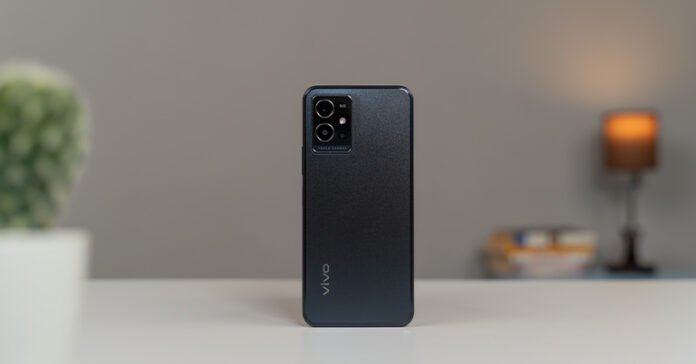 In this Vivo T1 5G review, I’ll be discussing all about this mid-range 5G phone. As you guys might know, Vivo boasts some of the best design and camera phones the industry has to offer. But, the brand hasn’t really been able to build a name for itself when it comes to delivering the best value-oriented smartphones.

Seems like the company wants to turn this tale around with its T-lineup of devices. For starters, “T” is an entirely new series from the brand that is geared towards the Gen-Z audience. And, at present, it consists of only one smartphone—the Vivo T1 5G which I have been using for over two weeks now.

That price puts it in the same league as the recently launched Realme 9 Pro 5G and Redmi Note 11T 5G. By the way, the new iQOO Z6 is the same phone as this one, but with a cheaper price tag. As a result, the T1 5G has got quite a competition here. So, is Vivo heading in the right direction with the new T1 5G smartphone, let’s find out in this review. 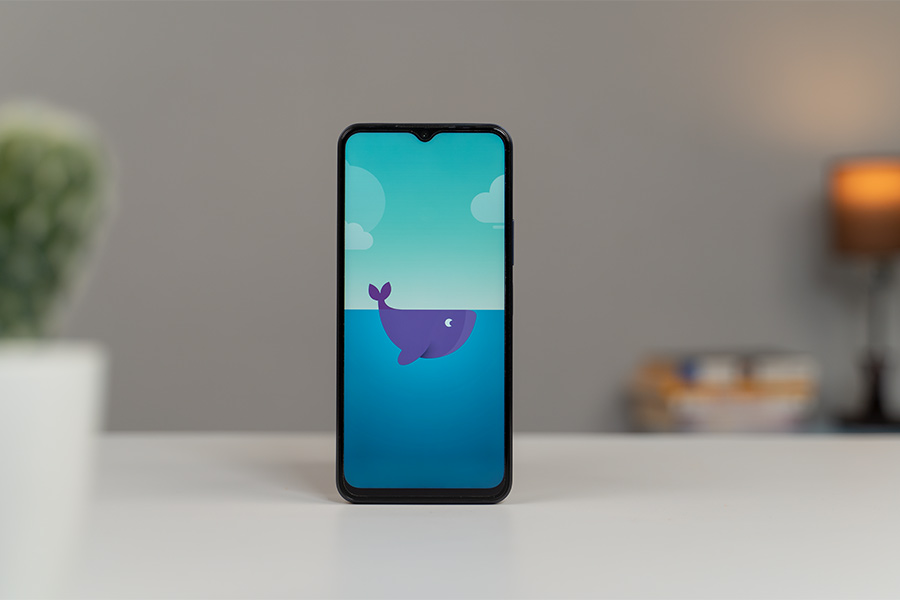 First things first, the most alluring aspect of this smartphone—like most Vivo phones—is its design. It is available in two color options—Starlight Black and Rainbow Fantasy—and I have it in this Black color that features a glitter embossed finish on the back.

After using some flashy-looking phones like V23 Pro and Reno 7 Pro, I wanted to go with something subtle, so I grabbed this one. And to be honest, this black shade looks much better in person than it does in pictures. Don’t you think? Plus, the T1 comes with a matte finish that does not attract any fingerprints or smudges. So, that’s good too!

Moreover, Vivo is touting the T1 as the slimmest 5G phone under the 20,000 price bracket in India. At 8.25mm it’s definitely slim—if not the slimmest—and with just 187 grams of weight, it is not bulky either. Then there are these 2.5D flat frames on the sides that provide you with a really comfortable grip. Likewise, for biometrics, the right frame houses a fingerprint sensor infused in the power button which is quite fast and accurate.

Here, I can see how much work Vivo has put in to achieve this design, but the one thing that has bugged me since I started using the phone is the dewdrop notch on the front. As one can easily tell, the notch makes the phone look quite outdated in 2022. I mean, how much effort or engineering would it have taken to cut a punch-hole in the center or on the left?

Regardless, the front greets you with a 6.58-inch screen with an FHD+ resolution. Now, it’s not an AMOLED panel, but for the most part, it’s quite good. Content looks sharp with good colors and the screen can get sufficiently bright as well. And, while the display on T1 does not have any HDR 10 certification, you do get WideVine L1 support for Full HD streaming on OTT platforms like Netflix.

Moving on, this screen also boasts a 120Hz refresh rate to deliver a smooth UI scrolling experience while the touch sampling rate can hit 240Hz on the game mode. But things aren’t well optimized here to make full use of the higher refresh rate.

In my time with the device, there were multiple instances where I had to deal with frequent stutters in animations while opening the app or scrolling through my social media feeds, and sometimes it showed such serious lags to the point of frustration. The issue got fixed to some extent with an update in the first week of March. Even though, one can still witness twitches in animation when multitasking between apps and sometimes even while scrolling through the Google News-feed. And, this issue is persistent in 60Hz and the 90Hz mode too. So I hope Vivo fixes this with another software update ASAP.

Keeping the transition issue aside, the T1’s performance is pretty swift for a mid-range device. Powering this handset is a Snapdragon 695 SoC which on a quick glance may feel like a mediocre processor—but actually, it’s not. In fact, Snapdragon 695 has newer Cortex-A78 and Cortex-A55 cores and can deliver performance comparable to the Snapdragon 750G.

As I have already used 695 in Moto G71, I am well aware of what this processor is capable of. The phone can easily handle regular day-to-day tasks while I have no complaints with its memory management either.

On to the gaming side of things, PUBG mobile caps out at HD graphics and High frame rate settings where you get fairly stable gameplay with no major stutters. For the smoothest of experience, Smooth graphics and Ultra frame rate yields a better result. Similarly, Pokémon Unite which offers 60fps gameplay is well playable at its highest settings. 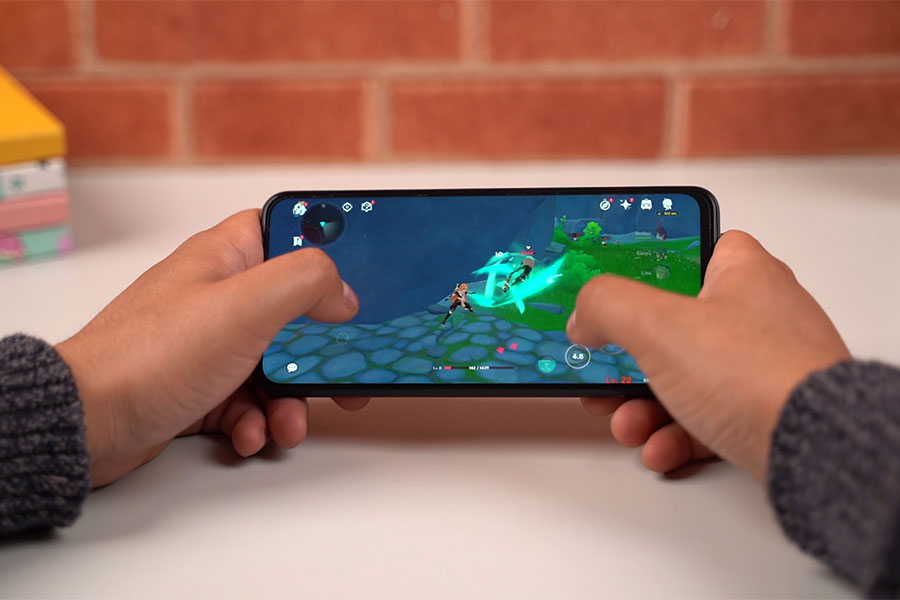 That said, Snapdragon 695 is not a gaming chipset by any means. Relatively heavier game like Genshin Impact is only playable at 30fps by dialing down everything in the setting to Low. But, even at the lowest of settings, you will still notice stutters every now and then. All in all, Snapdragon 695 is a pretty capable chipset for day-to-day performance but don’t expect it to give you an edge on gaming.

Moreover, as this SoC is manufactured on a 6nm process, you can expect a good battery life here. And, despite the slim form factor, Vivo has managed to squeeze a fairly big 5000mAh battery within. So, during my review period with this phone, I managed to get at least 7-8 hours of screen-on time almost every day. However, Vivo has done cost-cutting on the charging front by providing just 18W charging support. To be honest, the 18W speed on a mid-range phone doesn’t feel like a fast-charging anymore, as it takes around 2 hours and 10 min to fully juice up this 5000mAh battery. Even a 30W charging support would have done wonders, but that’s what you get.

Like the charging speed, the company has also compromised on providing a good number of 5G bands, as the smartphone supports just two of them. This is much lower than what other companies are providing in this price range.

Regardless, the T1 certainly has an edge over other mid-range phones in terms of software as it boots on FunTouch OS 12 which is based on Android 12. As a result, you get to enjoy major Android 12 privacy-focused features like Privacy Dashboard, camera or microphone indicator, and others. 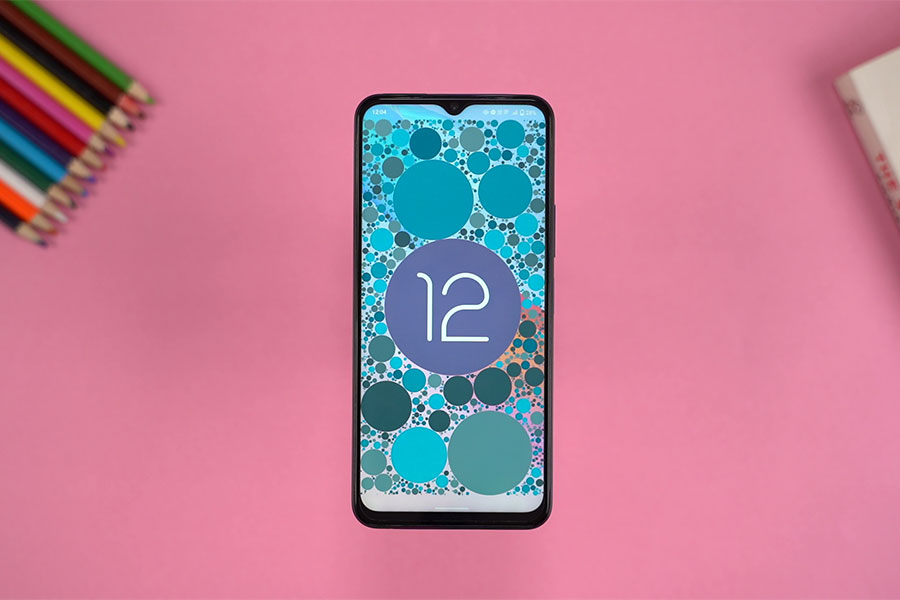 Regarding the software update, there’s no official announcement from the brand about the number of Android upgrades the device will get. But, I am hoping that Vivo has plans to push at least up to the Android 14 update in T1.

Okay, time to talk about its cameras. Hardware-wise, it’s nothing extraordinary here. The phone even misses out on an ultra-wide sensor and there are these 2MP gimmicky lenses for depth and macro shots.

I still don’t get why do brands even need to include these sensors in 2022 mid-range phones knowing that they are completely useless. Instead, I would be much happier to see a good ultra-wide sensor, which would have been quite beneficial for many. So, the only piece of the camera on the rear that one can be relied on is the 50MP primary lens.

And, thankfully its main camera can pull off some great shots. Here, the photos aren’t that oversaturated and have natural color tone while it maintains contrast very well too. And, the images retain a good dynamic range as well. Overall, I am quite happy with the photography prowess of the phone during good lighting conditions.

Now, for portraits, as you can see, the T1 zooms in for a better subject focus. The images here have a nice background blur and a good skin tone while the edge detection is decent for a mid-range phone. Likewise, the exposure is nicely balanced even against the direct lighting environment.

Moreover, the selfies are also quite good with a maintained exposure level in the background. It smoothens the subject a bit, but that doesn’t look unnatural by any means.

Now, normal nighttime images from the Vivo T1 have a decent level of detail with fairly controlled light flares.

Nighttime vs Nightmode
1 of 10

The night mode, on the other hand, does help to improve the details. However, in the majority of situations, I found that it focuses solely on light sources and tries to control the exposure in such areas which results in an overall dark image than the regular nighttime shots.

Macro shots unsurprisingly miss out on sufficient details. Nonetheless, it does not oversaturate the colors.

On to the video side of things, the Vivo T1 can record at up to [email protected] resolution from its rear cameras. Unfortunately, it doesn’t come with any type of stabilization. As a result, there were noticeable shakes in the video while walking around. The story remains the same in the [email protected] footage. Likewise, selfie video caps out at 1080p 30fps, and the videos aren’t stabilized here either. It also struggles to maintain the exposure in the background. 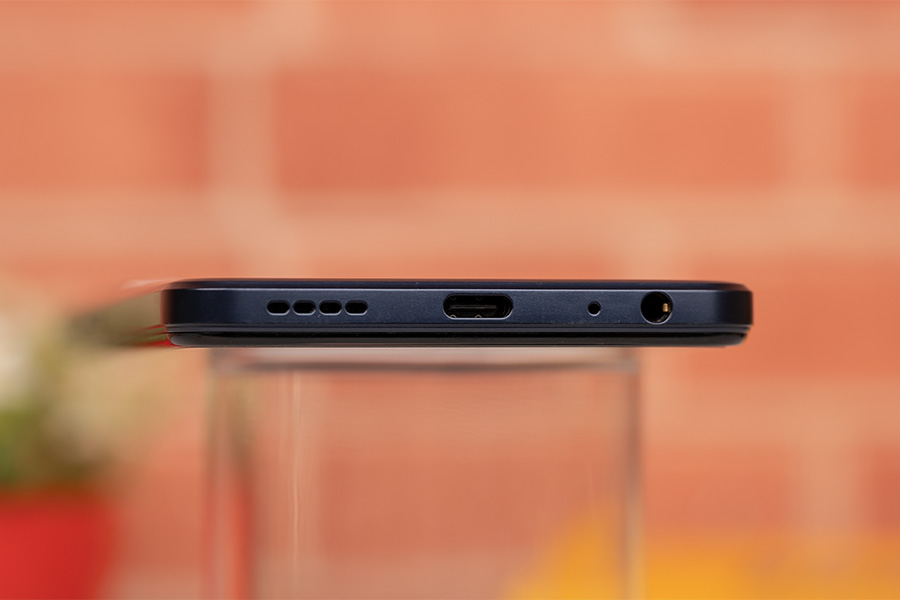 In terms of audio, it has a bottom-firing mono speaker that can get loud enough for your casual multimedia consumption. But, it definitely doesn’t provide the immersive-ness of a stereo speakers setup. Call quality is more than satisfactory though. I got no complaint from people on the receiving end about the loudness or clarity of my voice. There’s no trouble with the proximity sensor either.

Okay, this brings me to the end of my review of the Vivo T1 5G. So, should you buy this phone? Frankly speaking, I am hesitant to say a direct Yes! And I have some reasons for saying that.

Yep, it has a fairly capable chipset, that offers balanced performance and the camera can pull off great photos—something I believe most mid-range phones lack. But that’s basically where the edge of T1 comes to an end. Despite having a 120Hz display, it isn’t fully optimized, the ultra-wide sensor is missing from the camera stack, and while being a 5G focused device, it even lacks a sufficient amount of 5G bands. The device also has an old dewdrop notch that certainly looks out of place in 2022. And the company hasn’t even included a stereo speaker setup to enhance the multimedia experience.

So, putting these pros and cons side-by-side on a scale, I definitely do not need to tell which side has the upper hand. For a similar price, I believe Realme 9 Pro 5G should be a better value for money, as it has a higher number of 5G bands—at least higher than Vivo T1; supports 33W fast charging, and has an ultra-wide lens included camera array.