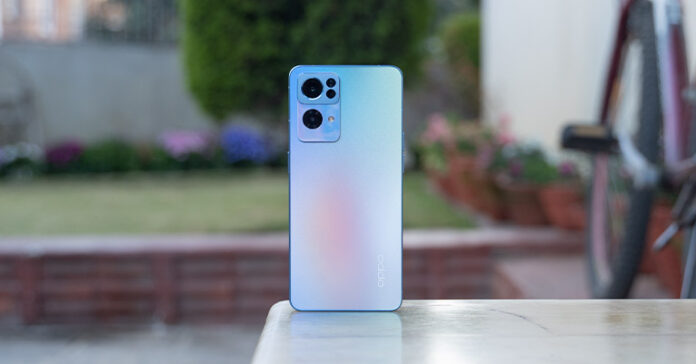 For this review of the OPPO Reno 7 Pro, I have been using it as my daily driver right alongside Vivo V23 Pro for the better part of 2 weeks now. On paper, both these phones provide almost the same level of performance, have amazing designs, and are marketed as good camera phones. And they share a similar price tag as well!

So, instead of making a head-on review of the OPPO Reno 7 Pro, I’ll be going through my overall experience using the phone and whether you should get this over V23 Pro or not. Let’s get right into it!

So, when it comes to the design, OPPO phones never disappoint. I mean, they always have something refreshing and eye-catching to show for. And the Reno 7 Pro is no different.

It does not exactly change colors like the V23 Pro but it sure has its own thing going on. Here, OPPO has used a signature “glow” at the back which gives off a shimmering and gradient finish. And there’s this camera module that glows upon incoming notifications, charging, or when you get a call. I think it looks really really cool and reminds me of Samsung’s Galaxy J2 Pro from back in 2016.

Looks aside, the phone feels very up class on the hands too. OPPO has paired this glass back with aluminum frames, as a result of which the Reno 7 Pro has a good heft to it. While the back is quite slippery, this iPhone-like boxy build makes sure you get a good grip too.

All in all, even though its design is clearly “inspired” by iPhones, I kinda prefer it over the V23 Pro’s curved back. It also has Panda Glass protection at the back, unlike the V23 Pro which uses no form of glass protection on its rear panel. So, the Reno 7 Pro should be more resistant to scratches and other minor impacts.

Plus, another thing I love is this finish is that the phone does not catch fingerprints and smudges at all which makes life much easier for someone like me who does not like using a cover.

On the display front, well, things are not that different between these two phones. You get a similar 6.5 inch AMOLED panel here with a 90Hz refresh rate, 180Hz touch sampling rate, and HDR10+ compliance. This screen is plenty bright and feels smooth and responsive to use. Plus, the core quality of this display is also very good, which makes it an excellent option for multimedia consumption. But there’s one important thing you need to know about Reno 7 Pro’s display. Although it supports HDR video playback in Amazon Prime, there’s no HDR playback on Netflix as of yet. It’s quite strange, to be honest.

Also, its refresh rate is not adaptive—meaning you will have to stick with either 90 or 60Hz. There’s no middle ground between the two. I kept it at 90Hz all the time and thankfully didn’t notice any optimization issues, which is great.

But still, I have come to expect a smoother 120Hz refresh rate on smartphones in this price bracket, so I am slightly let down in this aspect. Other than that, the optical in-display fingerprint sensor here works like a charm and the tiny notch up top is not obtrusive at all.

And I found its haptic feedback to be quite good as well. It’s very subtle and certainly better than V23 Pro’s mushy feedback. Also, unlike the V23 Pro, you get dual speakers on the Reno 7 Pro. They’re not necessarily louder than the competition, but sound more balanced. Vivo’s single speaker delivers pronounced highs with little bass to enjoy whereas Reno’s audio output has a good balance of lows, mids, and highs. And I definitely prefer its audio over the V23 Pro.

Alright, let’s talk about the cameras now. Spoiler alert—I found its cameras to be fairly good, if not the best performing at its price range.

At the back, there’s a triple camera setup with a 50MP primary Sony IMX766 sensor, alongside an 8MP ultra-wide and a 2MP depth sensor. Interestingly, there’s also something called a color temperature sensor here, which supposedly improves color accuracy in an image by detecting light around the subject.

Anyway, the normal daytime photos from the main cameras here have a very subtle color reproduction, which is something most brands don’t go for.

Usually, Samsung, Realme, Vivo and even OnePlus’ color optimization is on the saturated side, so in comparison, you will get relatively flatter images from its cameras.

Therefore, if you are someone who likes editing their photos before posting on social media, OPPO gives a more flexible option here. Details in images are also decent and HDR works well in almost all instances here.

I am especially impressed with how the IMX709 sensor on the Reno 7 Pro manages to maintain background exposure in selfies even in harsh sunny conditions.

Talking more about the selfies, they’re well detailed and with good HDR processing. You can notice a slight red/pink tint in some instances, but overall, this 32MP selfie camera does not disappoint.

OPPO also advertises this phone as “the portrait expert” and on my tests, for the most part, it did manage to bring out fairly good-looking portraits with a well-exposed background. However, I feel like the shadow processing on subjects could have been better as they appear a bit dark at times.

Night-time shots also have good details in them when you zoom in, but they’re also quite noisy. Then again, Reno 7 Pro’s night mode works really well to remove the noise and bring out clear, bright, and even more detailed shots.

And the good thing is that this camera does not take a lot of time to process night mode pictures either. So, if you are out at night and want to try some nighttime photography, Reno 7 Pro will not disappoint.

However, I wish I could say the same about its ultra-wide images too.

They’re just average and are lacking in terms of details and color processing compared to the primary camera. Also, most of the time the images come out hazy for no reason!

And if you are a vlogger, I wouldn’t recommend this phone for you either. First off, the selfie videos here are capped at 1080p 30 fps only. And natively, its exposure control isn’t that good as well. Turning on the AI mode does help with balancing the exposure to some extent though. As for rear cameras, you can record at up to 4K resolution at 30 fps—but there’s no stabilization in the footage. 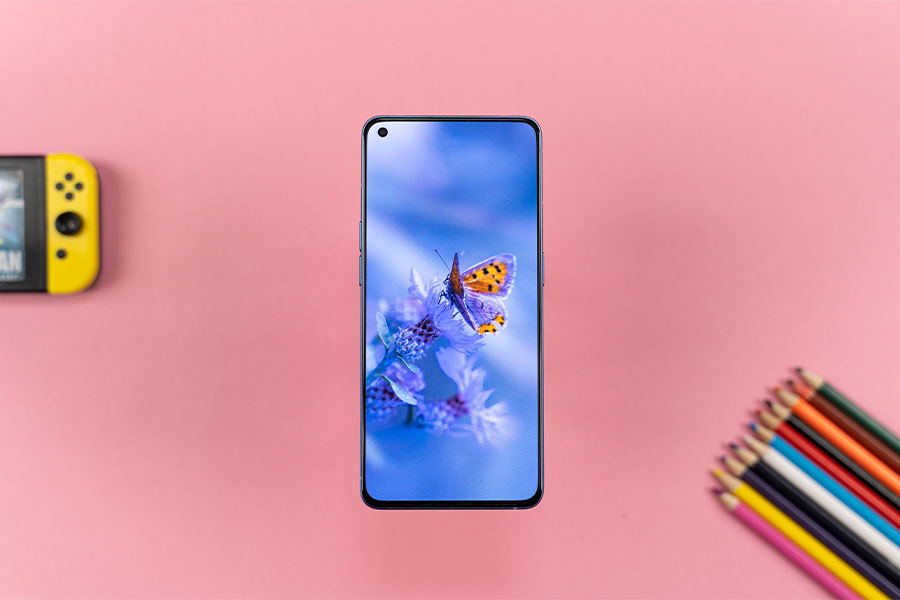 It’s only at 1080p 30 fps or 60 fps that you can get somewhat steady videos. So if you’re someone who shoots videos just casually, the Reno 7 Pro can do a fine job. But it’s certainly not meant for anything more than that.

In conclusion, the OPPO Reno 7 pro is a good camera phone for casual photography. However, it does not deliver anything exceptional in the videography aspect. As a result, it definitely is not a balanced camera phone overall but will do for general users.

Moving on, the Reno 7 Pro is the first phone to feature the custom Dimensity 1200-MAX chipset. For this, OPPO has collaborated with MediaTek—just like what OnePlus did with the Dimensity 1200-AI on the Nord 2. To note, the 1200-MAX is supposed to provide 22% faster processing and 25% more power efficiency compared to the standard Dimensity 1200.

Now, as I mentioned earlier, I have been using the Reno 7 Pro besides the V23 Pro with Dimensity 1200 chip. And during normal, everyday usage, I didn’t find any significant difference between the two. Both phones are fast enough and show no signs of distress even under heavy multitasking.

But during gaming, I did notice the Reno 7 Pro bearing slightly more stable results, especially in demanding titles like Genshin Impact. I played the game on both phones at the highest of settings in 60 fps mode and got very similar fps. However, as you can see from this chart, the Reno 7 Pro delivers better stability.

But you should know that this stability comes at the cost of slightly higher temperatures—especially near the camera module during the first 5 minutes of the game. Likewise, the temperature rose to 42°C after 10 minutes or so.

In other games like PUBG and Call of Duty Mobile, I got similar results with both devices being able to manage 100% stability in their respective highest settings. OPPO has also optimized some games to take advantage of the 90Hz refresh rate here. For instance, I played Mech Arena in its highest settings and achieved 90 fps with 99% stability. However, other games like Oddmar that also have a 90 fps mode were limited to 60 fps only. 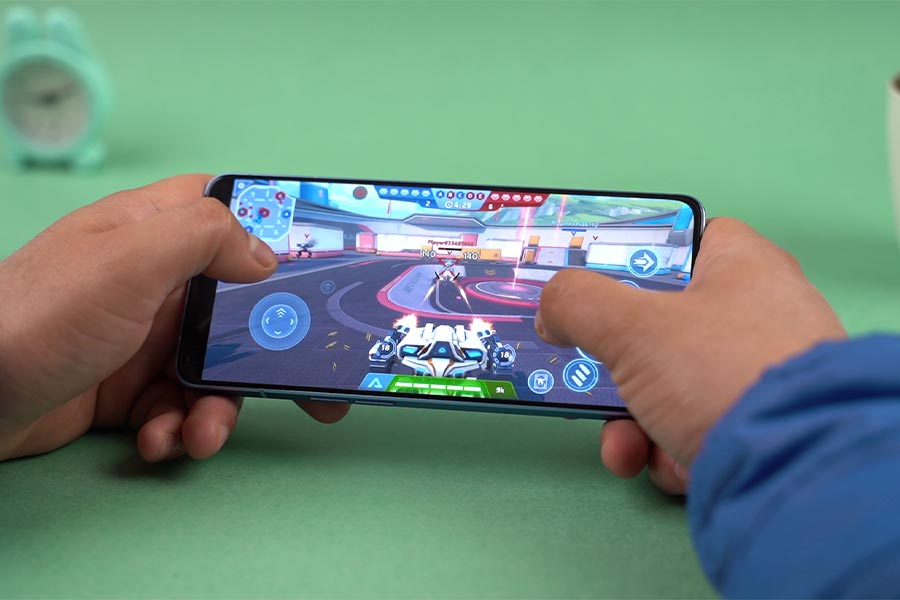 Overall, I have to say that the Reno 7 Pro’s gaming performance is really good. I really like how the phone manages to give stable results in almost all games I tested. But do keep in mind that the phone gets warm after a few heavy gaming sessions.

Moving on, this phone boots on Android 11 with ColorOS 12 on top. For me, Android 11 on a premium mid-range phone in 2022 is completely unacceptable. There are rumors of the Android 12 update arriving very soon, although there’s no official statement from OPPO yet.

Moreover, the company hasn’t specified how many OS updates the Reno 7 Pro will receive over the years either. So, this is something OPPO needs to address ASAP!

About ColorOS, well, there’s the usual set of customizations, gestures, and not to mention a ton of pre-installed apps. We know that these things are not new to ColorOS, so naturally, the first thing I did after setting up the phone was try to uninstall them. And the good thing is that most of them can be uninstalled. Great! OPPO has also introduced something called “Omoji” here, which is pretty similar to Apple’s Memoji. With this, what you can do is create digital avatars of yourself and keep them as Always on Display and such. I found it quite interesting and therefore made one Omoji of myself too.

Getting to the battery life, well, I have been pretty satisfied with it so far. The Reno 7 Pro features a larger 4500mAh battery compared to a 4300mAh cell on the V23 Pro. Pair this with OPPO’s aggressive battery optimization, I got around 6 to 7 hours of SoT under moderate usage which included a lot of phone calls, texting, social media usage, and watching videos every now and then. Charging this phone is super fast too, well not as fast as the Xiaomi 11T Pro with its 120W charging, but OPPO’s proprietary 65W Super VOOC charger gets this device from 0-100% in around 32 minutes only.

Summing up this review, the OPPO Reno 7 Pro is most definitely a head-turner of a phone in terms of its design—while its display, speakers, and battery life are pretty solid too. However, I feel like the company could have optimized the cameras better in terms of portraits. Also, I found its lack of better video recording capability and the fact that it still runs on Android 11 to be a sore spot for me.

And not to forget, like with most OPPO phones, the Reno 7 Pro is priced slightly higher for the specs it offers as well. Yes, you can get some discounts in the offline market, so it’s not exactly a bad choice in its price range.