Home Xiaomi Xiaomi Redmi 5 Plus now available in Nepal with beefed up RAM... 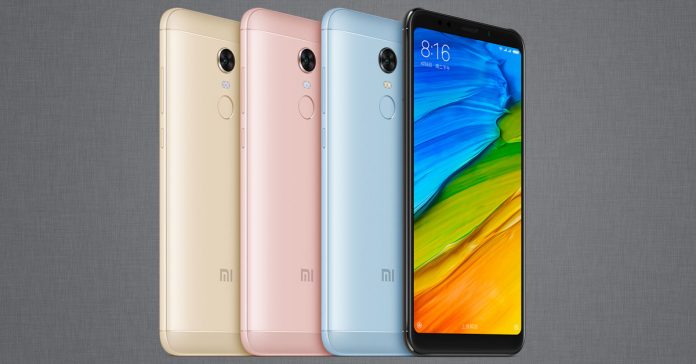 Xiaomi has been bringing the power-packed smartphones that provide optimum value for money in terms of performance. Continuing the tradition, Xiaomi had added another midrange smartphone to their lineup a few months back. In addition to the praiseworthy performance, the smartphone came with the near bezel-less display. Named as Xiaomi Redmi 5 Plus, the device was the first Xiaomi Smartphone to inherit that trendy design. Now within less than two months of time, the smartphone is now available in Nepal. And all thanks to the Vatsal Impex Pvt. Ltd., the authorized distributor of Xiaomi products in Nepal, who made it possible.

Wrapped in an Aluminum body, Xiaomi Redmi 5 Plus does not seem much different from a typical Xiaomi smartphone in terms of design. But what contrasts the Redmi 5 Plus from the bunch of the Xiaomi mobiles is the display. Shrinking the bezels on the forehead and the chin, Xiaomi packed a taller 5.99-inch display in nearly same form factor as that of the Xiaomi MI A1 and the Redmi Note 4. In addition to the FullView display, Xiaomi Redmi 5 Plus has been another smartphone with the 18:9 aspect ratio, which has come to fashion these days. Furthermore, the display on the smartphone has got the protection of Gorilla Glass on the top to evade the vulnerabilities of cracks and scratches during the falls.

There is Snapdragon 625 chipset to drive the device, which comes coupled with 3/4GB of RAM. In terms of internal storage, the device comes with the variants of 32GB and 64GB. There is also a privilege to expand this amount to 128GB by using a micro SD card. However, there is not a dedicated slot to launch the micro SD card. So one has to sacrifice the SIM2 slot for the SD card. On the software side, the device boots with Android Nougat (v7.1.2) out of the box. There is also the Xiaomi’s home-baked MIUI 9 on the top to spice things a little more.

On the camera front, there is a 12MP sensor on the back. The rear camera comes with an aperture of f/2.2, 1.25 μm pixel size, and phase detection autofocus. There is also dual-tone flash to inject light while shooting in the dim-lit places. And up front, there is a 5MP front camera to capture the selfies. In terms of sensors, Xiaomi Redmi 5 Plus inherits all the basic sensors like Accelerometer, Gyro Sensor, Proximity, and compass sensors. And there is a remarkable 4000 mAh non-removable Li-Po battery to fuel the device.

Xiaomi Redmi 5 plus Price in Nepal

Vatsal Impex Pvt. Ltd. has attached a price tag of Rs. 20,999 for the 3/32GB variant and Rs. 24,999 for the 64GB variant. At this price, users are getting a remarkable performance and long-lasting battery. The device on the top looks elegant with narrow bezels around the borders. But at this price, Xiaomi’s own Redmi Note 4 and Xiaomi MI A1 may pose a competition to the device.

Xiaomi Redmi Note 4 is now available at the price of Rs. 22,999 (for 3/32GB) and Rs. 25,999 (for 4/64GB). The device possesses pretty much the same specs but with a minor bump of a battery (4100mAh) and the rear camera (13MP). But at the price difference of Rs. 500, choosing a smartphone with the trendy design language over a slightly bigger battery seems a no-brainer.

And there is Xiaomi MI A1. This device does not pack a humongous battery like the Redmi Note 4. MI A1 possesses a rather smaller battery with 3080mAh capacity. However, the smartphone excels in the software and camera department. MI is an Android One device with Stock Android on its system. Being an Android One device, it has blessings from Google for the future OS updates. And talking about the camera, MI A1 is gifted with Dual-camera setup on the back. So at the price of Rs. 26,999 (3GB/32GB), you will be able to zoom up to 2x without loss in quality and take portrait shots.