Realme has launched its first flagship powered by the Snapdragon 8+ Gen 1 chipset. In addition to the new SoC, Realme GT 2 Explorer Master Edition marks the company’s collaboration with popular fashion designer, Jae Jung. So, let’s take a look at the specs, features, expected price, and availability of the Realme GT 2 Explorer Master Edition in Nepal.

Realme has been continually exploring new elements for its phone’s design. The GT 2 Pro, for example, launched with a paper-back design. In addition, Realme’s Master Edition phones are always known for their unique design.

In the same vein, the Explorer Master Edition of GT 2 has launched with a “Hard case.Wilderness” variant classic travel trunk-inspired look.

The design is made in collaboration with Jae Jung, a fashion designer who believes that this design strikes a balance between aesthetics and functionality. 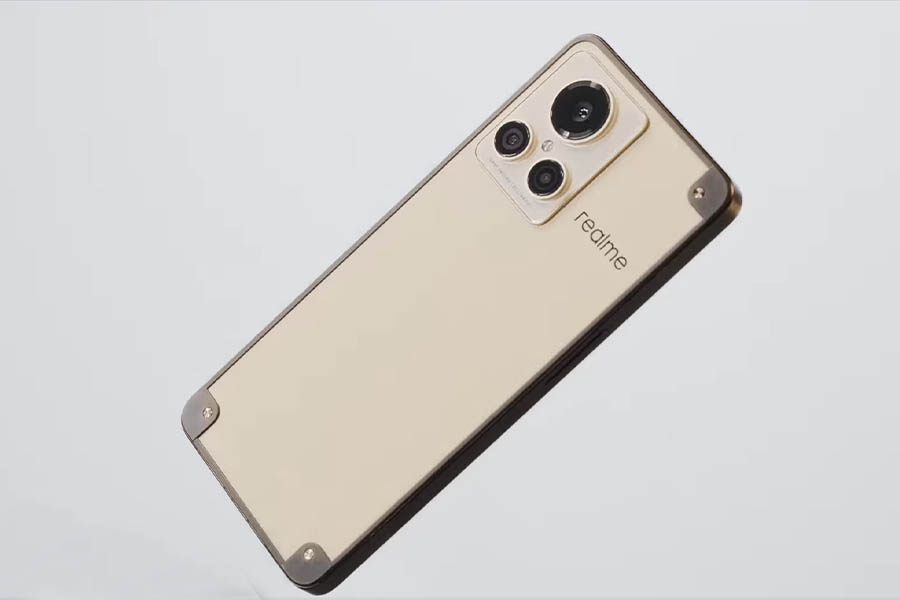 The back of the phone is made of vegan leather and unlike the GT 2 Pro, this guy has flat frames with squared-off edges. As per Realme, the frame has gone through 20 polishing processes, giving it a fine matte texture. There are also trunk-inspired metal rivets on the bevel.

The other two color options come with a shiny textured finish because of the MSI AG process. They are also both lighter and slimmer than the hard case version.

Over on the front, Realme GT 2 Master Edition sports a 120Hz AMOLED screen with ultra-narrow micro-edge bezels. Those on the sides measure 1.48mm, while that on the top and bezels are 1.84mm and 2.47mm thick, respectively.

The screen has a diagonal length of 6.7-inches and boasts 360Hz touch sampling rate. The latter can boost up to 1000Hz at times. Furthermore, it’s a 10-bit screen with 100% DCI-P3 coverage and HDR10+ certification.

As mentioned earlier, Realme GT 2 Explorer Master Edition is the first phone from the company to feature Qualcomm’s latest flagship chipset. With this, Realme has joined the likes of Xiaomi, Asus, and Nubia as the only brands with Snapdragon 8+ Gen 1 phones in the market.

Talking about the chip, it is based on TSMC’s 4nm process node. This alone has allowed Qualcomm to make the chip 15% more power-efficient than the regular 8 Gen 1 based on Samsung’s 4nm process. The Cortex-X2 Prime core has been overclocked to 3.2GHz resulting in an overall CPU boost of 10%. Moreover, the GPU is also 10% faster.

On the memory side, Realme has opted for LPDDR5X, making the GT 2 Explorer Master Edition the only phone with the RAM standard. According to the company, the new RAM consumes 20% less power than LPDDR4. It is paired with up to 256GB UFS 3.1 storage.

Another highlight of Realme GT 2 Explorer Master Edition is its dual vapor chamber cooling with 4811 sq. mm. Realme has even increased the capillary density and liquid cooling reflow capacity by 100%.

In addition, the phone has 11 layers of heat dissipation layer, including diamond thermal gel and 3D graphene structure, contributing to a massive 37924 sq. mm area. You can also find two pressure-sensitive buttons on the frame for that extra control for gamers.

There is another 50MP sensor with a 150-degree Field of View that users can take ultrawide shots with. Finally, the third sensor is the second-generation microscope lens with 40x magnification. Upfront, the center-aligned punch-hole cutout is home to a 16MP selfie camera.

Realme GT 2 Explorer Master Edition packs a 5,000mAh battery, consisting of two cells of 2500mAh each. It supports 100W fast charging. The company includes a 100W GaN charger in the box. As for biometrics, you get an optical in-display fingerprint scanner. Other highlights of the Realme GT 2 Master Edition include 4D game vibration, 360-degree NFC, stereo speakers with Dolby Atmos and Hi-Res audio, and cross-platform collaboration. The company even says the phone can detect hidden cameras in rooms.