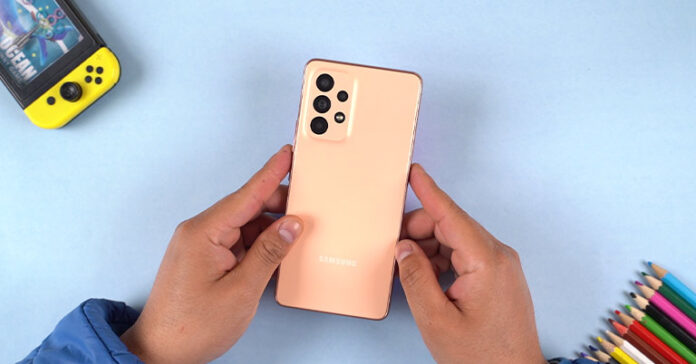 Here, I’ll be going through my initial impressions of the new Samsung Galaxy A53 5G. So far, the company has launched four phones in the A-series this year: the Galaxy A23, A33, A53, and the Galaxy A73. The A23 is the least expensive phone among the four while the A73 is the most expensive one.

As for the Galaxy A53, it is currently available for pre-booking in the US for USD 450, but Samsung is also throwing in a pair of Buds Live worth around USD 150 for free as a part of a pre-booking deal.

Likewise, the phone has already made its way to the Indian market as well, where its base 6/128GB model goes for INR 34,499. We can confirm that the Samsung Galaxy A53 5G will be launching in Nepal pretty soon as well.

Anyway, the Galaxy A53 is one of the first mid-range phones from Samsung that skips a charger inside the box. Just like the company’s flagship phones, all you get is some paperwork, a SIM ejector tool, and a Type-C to Type-C cable inside the box. And that’s about it. You’ll have to buy a 25W charger separately, which costs about USD 20. All this considered, I seriously think Samsung has got to go easy when pricing this phone. With that out of the way, let’s talk about the phone itself!

I have been using the Samsung Galaxy A53 5G for a day or so, and I can instantly notice the same DNA here that we saw on last year’s A52 and A52s. Even if you look at the spec-sheet side-by-side, the A53 doesn’t necessarily bring any major upgrades.

So, Samsung’s formula is basically “if it ain’t broke, don’t fix it”.

But I do see some quality of life improvements here. Starting with the design, although its overall dimension and weight are exactly the same as last year’s A52, Samsung has included a bigger 5000mAh battery this time versus 4500mAh in its predecessor. Plus, A53’s plastic back feels more premium compared to previous models as well.

I think they have used different kinds of polycarbonate material which feels of much better quality. And just like last year, I like this phone’s overall heft and weight distribution as well.

That Awesome Peach is a… peach

It doesn’t feel too big to hold, so you will enjoy typing on this thing—even with one hand. I also love this new Peach color variant, but you can also choose between Black, White, and Blue finishes. But yeah… this Peach color looks quite attractive and unique if you ask me. Regardless of the color variant you end up going for, the Samsung Galaxy A53 5G gets IP67 dust and waterproofing. And it seems like Samsung is so into this feature that they have included it on the cheaper Galaxy A33 as well.

As you guys might know, I am using the S22 Ultra right now as my primary phone, and what’s great about the Galaxy A53 5G is that Samsung has used the similar color science of its flagship phones on their cheaper models too.

And since we have been testing a lot of midrange phones from Xiaomi, Realme, and OnePlus in the past couple of weeks, I can instantly tell you that the A53’s display is just better in every possible way. Sadly, Samsung has removed the headphone jack on the Galaxy A53 5G which was present on last year’s A-series phones. But you do get a stereo speaker here.

Looking at the benchmark tests that I ran, the Exynos 1280 looks very similar to the Dimensity 920 and the Snapdragon 778G. So, it’s a pretty capable chipset—yes—but if you want pure performance over everything else, Samsung’s mid-range phones aren’t the best option.

You will easily get phones with Dimensity 1200 at a lower price while OnePlus is also launching the Nord 3 with Dimensity 8100 pretty soon. The iQOO 9 SE is another phone that’s priced similar to the Samsung Galaxy A53 5G but comes with a much more powerful Snapdragon 888 chipset.

In my brief time with the phone, I’ve found it to be plenty fluid where animations render well and the UI is enjoyable to navigate as well.

I also didn’t notice the phone getting warm, so that’s a positive sign too. As for gaming, I have only had a few sessions of PUBG Mobile so far, but I am a little disappointed to see that the max setting that you can go here is HD graphics and High frame rates. That’s basically 30-35 fps on average and nothing more.

But since it’s a pretty new chipset, a software update should certainly be on the cards which should improve the overall performance. Fingers crossed! And talking of software updates, Samsung has promised 4 years of OS and 5 years of security updates on the Galaxy A53 5G while this thing runs on the latest Android 12 straight out of the box! So, this is just an insane level of software commitment, which is unheard of on a midrange phone.

Ok, time to talk about its cameras and this is where the A53 wins big time against any mid-range phones you could find right now. We get a familiar-looking curved slope camera cutout here that houses a quad-camera array with a 64MP primary lens equipped with OIS, a 12MP ultrawide lens, and two 5MP depth and macro sensors.

Not much of a camera update

I have captured over 50+ photos with this phone in less than 24 hours and I really like them. During the daytime, you get well-detailed, sharp images with the classic Samsung color-optimization.

The HDR processing is good and the whites are balanced as well. The 12MP ultra-wide camera is also a class above what the other brands manage.

It has a wider field of view and much better details than the one from other mid-range phones that usually settle with an 8MP ultrawide lens.

Even the portraits here have good skin tone and shadow detail while the overall image has a nice bokeh and background exposure. It’s the same with selfie photos too.

But I think the biggest improvement with the Galaxy A53 is low-light photography. As you can see, it can capture some good nighttime photos.

And this time around, Night Mode doesn’t take too much time to process the shot either. So, I am guessing the Exynos 1280 has a superior image signal processor compared to the ones from MediaTek and Qualcomm.

So yeah, the Galaxy A53 is definitely a pretty decent mid-range camera phone for photos. But for videos, I think Samsung has deliberately made it look inferior. Companies often do this to differentiate it from their flagship phones, and sadly, the A53 is the victim of this culture.

That’s because both the 4K 30 fps and 1080p 60 fps videos don’t have stable results despite the phone’s primary lens featuring OIS, whose primary task is to… stabilize the videos. And when using the “Super Steady” mode, it caps out at 1080p 30fps and the overall video quality gets even worse.

Anyway, although the Samsung Galaxy A53 5G has left a pretty good impression on me—before I can give you my solid judgment about the phone—I will be using this phone alongside the iQOO 9 SE which I have just bought for review.