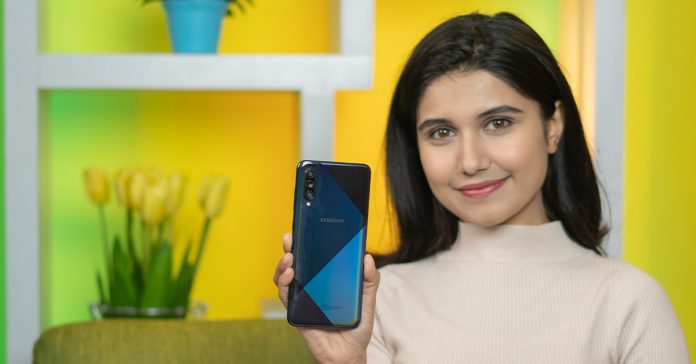 Alright, today I have the Samsung Galaxy A70s. It has been my primary phone for more than a month now. At first, I was a little put off by the fact that there is a minimal upgrade in the A70s from the Galaxy A70. But now that I have used this phone, I have a slight change in my opinion. What changed? Let’s talk about it in this review!

Okay, above all, the first thing I look for in a phone is the quality of the display. Because you interact with it at all times, it needs to be good.

The Samsung Galaxy A70s with its 6.7 inches Super AMOLED screen has given me an unforgettable display experience. This is among the best displays I have seen in a phone of this price range. 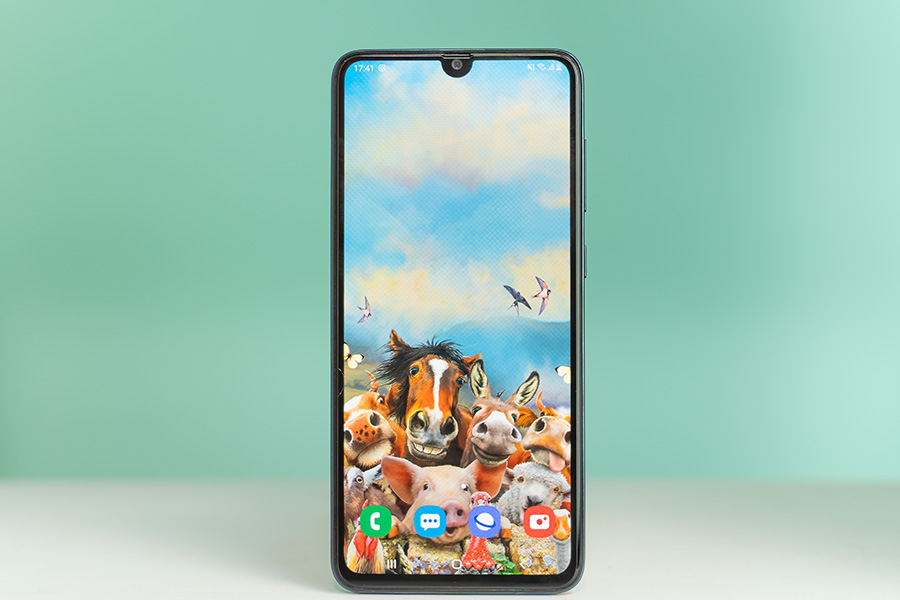 And because this is an AMOLED panel, its contrast is simply amazing. I’ve had the best time watching videos on YouTube and even reading e-books on it. The large screen expands the gaming experience as well. The phone also has Widevine L1 certification, so if you are someone who watches Netflix and Amazon Prime videos on your phone, you can watch it in HD resolution. 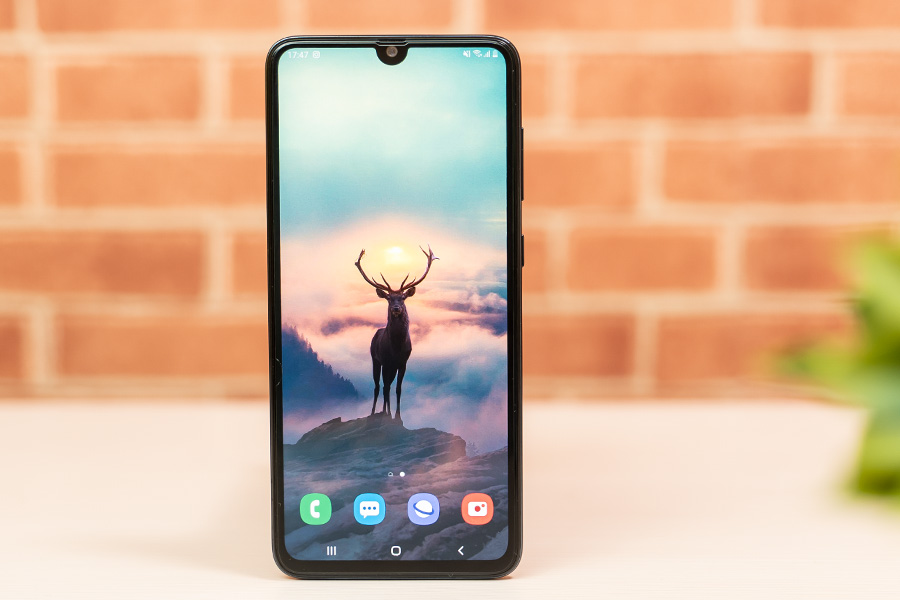 Additionally, the A70s gives you the option to go full screen with navigation gestures, which makes the already big-screen look even bigger.

What’s also big on this phone is the battery size. Its large screen definitely needs a lot of power which the phone generously provides with its 4500 mAh battery. On a full charge, I got over a day with moderate usage, which I think is pretty good.

Before the Samsung Galaxy A70s, I used the Redmi Note 8 Pro as my daily driver which has the same 4500 mah battery capacity. However, the A70s performs better because of three reasons:

So, with a big display and excellent battery life at the helm, I think the A70s is definitely one of the best mid-range smartphones for a multimedia experience.

The charging on the A70s is quite fast too. You get a 25W charger inside the box that charges the battery in about 1 hour and 10 minutes. Also, it’s not your normal charger that has a USB A to USB C plugins. This one, like the Galaxy Note 10 Plus, has a Type C to Type C outlet which makes the power delivery faster than the USB A outlets.

Now, with the huge battery, you might think that the phone is all bulky and heavy. However, you get a slim and light form factor on the A70s. 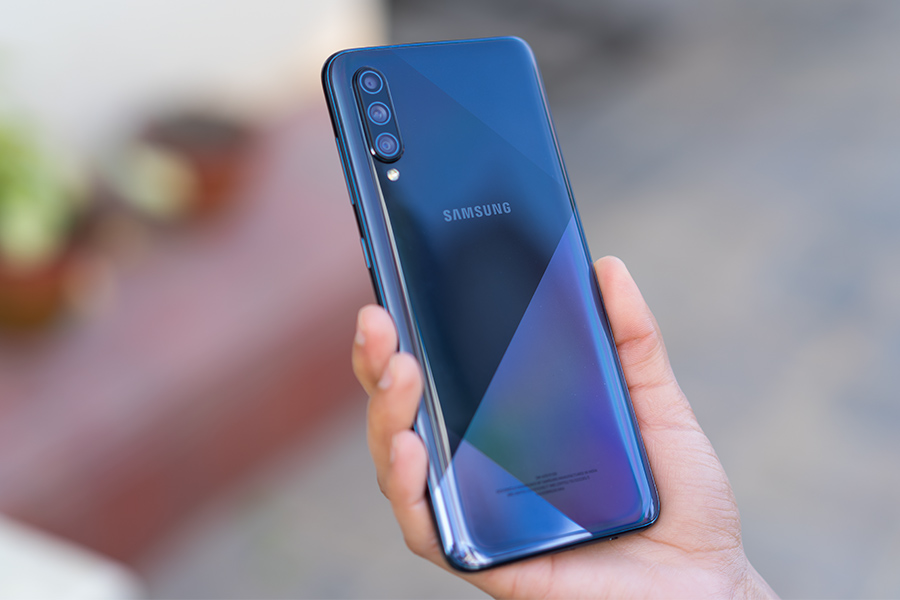 I don’t know how Samsung has managed to achieve this, because I recently reviewed the Galaxy A50s and it was thin and light as well despite featuring a big battery, and the same is the case with the A70s.

On the contrary, phones from other manufacturers with 4000 mAh battery in the same price range have a have significantly bulky design, so kudos to Samsung!

Similarly, the precious 3.5mm headphone jack still lives on and the audio output from the speaker is also good, if not great.

More about the design, the back of the A70s is plastic which is slightly disappointing because the competing smartphones like the Redmi K20 Pro and Vivo V17 Pro are giving a glass design. Still, the A70s’ back looks good with its gradient pattern. 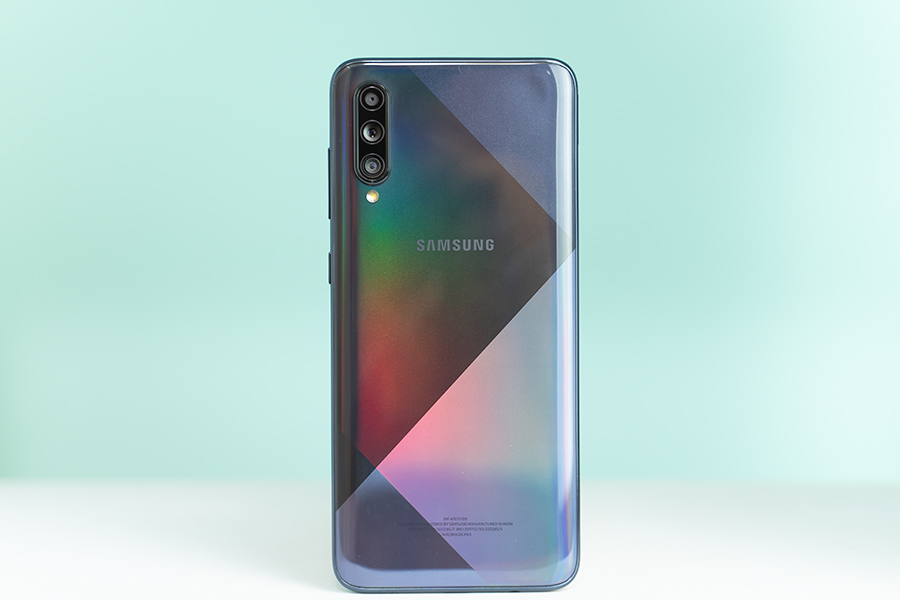 Nevertheless, since it’s plastic, it bears higher chances of getting scratched up. So if you are planning on getting this phone, you’d better case it up. By the way, you get a clear case inside the box, which for me has lasted well and I think it will go on for 2 months or so.

Okay, now let’s get to the performance. The A70s uses the same chipset as the Galaxy A70, the Snapdragon 675. And though it is an excellent mid-range chipset, for the price the phone asks, I had expected more; considering the K20 Pro offers the best-in-class processor for a more or less similar price. When comparing the benchmarks, you can see by just how much the K20 Pro trumps over the Samsung Galaxy A70s.

Take PUBG gameplay for example. In the K20 Pro, you can have a smooth experience even in Ultra frame rate and HD graphics but here the maximum you can go is High frame rates and HD graphics. And even in the recommended settings, you will experience some lags here and there. So, I would advise you to play PUBG in medium settings to get a smoother gameplay experience. 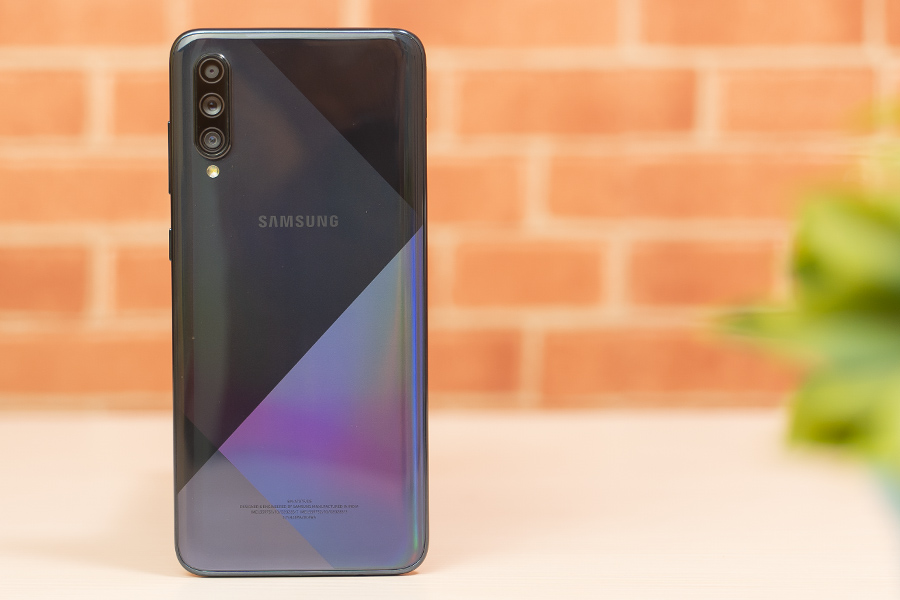 Having said that, normal performance is very good and will not disappoint you in any way. The UI here does not feel slow or laggy, which was the case with Samsung M30s and A50s which feature Exynos 9611.

With Samsung, the design and display are almost always satisfactory if not praiseworthy. But what it’s pathetic at is the implementation of a fingerprint sensor. The optical fingerprint reader on the A70s is slow and not that reliable either. There have been instances when it has refused to accept my fingerprint.

It was the same on the Galaxy A50, the A50s, the A70. And the “legacy” continues on with the A70s. I really hope Samsung looks into this in their future offerings.

The Face Unlock too is nothing to write home about. It is relatively slower than the Chinese phones out there. But since it’s software-based and not very reliable, I kept it shut altogether! 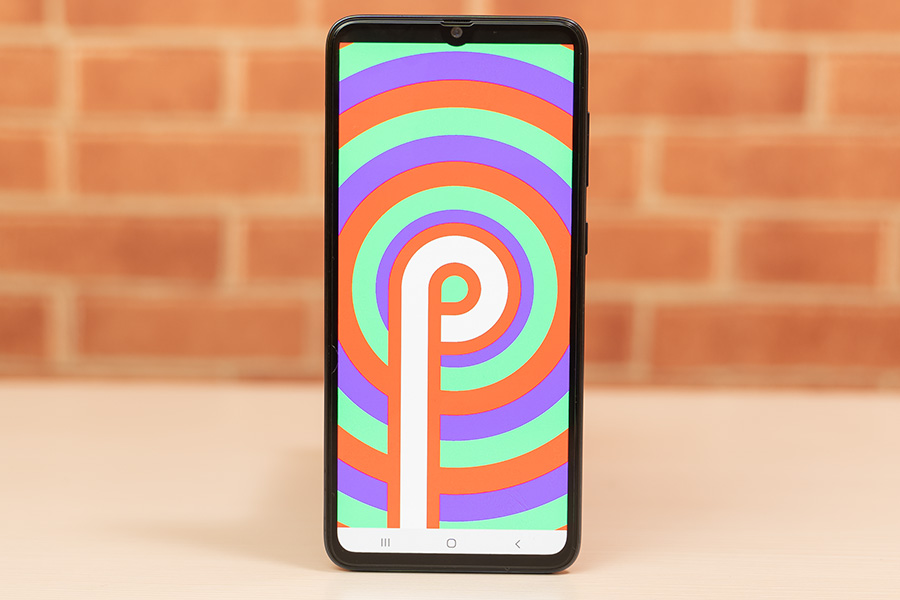 And because One UI is one of my favorite Android skins, I have been waiting for the One UI 2.0 to come on the A70s which is said to arrive sometime in April.

Okay, now other things aside, what I have really-really liked about the Samsung Galaxy A70s is the camera. Although the only difference in camera specs from last time is a jump from 32MP to 64MP primary camera, the cameras here on the A70s is totally praiseworthy. Spec-wise, you get the triple cameras in a horizontal fashion here. There is a 64MP primary lens with Samsung’s own GW1 sensor, an 8MP ultra-wide-angle lens, and a 5MP depth sensor.

Talking about the primary lens, the images produced have the right balance of saturation and contrast and so the photos from the A70s look pleasing. However, if you want an extra pop in colors, you can use the scene optimizer feature, which you will have to manually turn on by going into the settings.

Though Redmi Note 8 Pro and Realme XT use the same GW1 sensor, the images on the A70s are far livelier in comparison. Hence, Samsung’s software optimization is spot on.

The ultra-wide images too have the same kind of color reproduction as the main lens. This is certainly the kind of camera that you’ll like to capture landscapes with. Check out these samples I took and do let me know in the comments if you like them!

Portrait images are not the best when it comes to edge-detection though. But they certainly do look nice with good colors and natural-looking bokeh! And you can also change the background effect and blur amount before and after taking pictures, so you can choose by yourself the amount of bokeh you like!

However, Samsung has skipped the 2X telephoto zoom lens on the A70s, while the market’s flooding with smartphones with one.

Moving on to low-light performance, I think this is one area where the Samsung Galaxy A70s shines as compared to its predecessor A70. The night time images, while a little noisy, are surprisingly brighter and better after the camera processes it.

The night mode images are substantially brighter than the normal night time images. The camera seems to do a lot of processing which makes the end result bright and slightly more detailed. So, the night mode in here does a better job than what I found on A50s or the M30s.

Video-wise, you get options of shooting in HD, FHD and UHD among which the videos in FHD are stabilized, thanks to EIS. And the video quality I must say is up to the mark. The UHD videos lack stabilization despite having a good amount of colors and details. You also have an option to shoot wide-angle videos or the super steady mode which are again, pretty stabilized.

But still, Samsung doesn’t provide you the option to switch from normal to wide-angle in the same video. Maybe it’s because of the hardware limitation because the Note 10 comes equipped with it. Also, there’s no 60fps video recording under any resolution on the A70s which seems unusual for a camera of this potential. Now let’s get to the selfies. You get a 32MP sensor and looking at these images, you be the judge. The photos have pleasing colors with okay-ish details. More importantly, the skin tone looks really good.

Selfie portraits look equally pleasing though it’s the software that’s producing the bokeh. There’s a negligible degree of inaccuracy in edge-detection here and there, but I am willing to give it the benefit of doubt because the end result isn’t downright miserable.

And as it is with other Samsung phones, you get slow-mo, super slow-mo and hyper-lapse features on the A70s as well.

So, as I said in the beginning, I don’t hold the same opinion about this phone after getting to use it. Though there is no significant upgrade from its predecessor, especially in the performance department, the Samsung Galaxy A70s is still a good phone, especially for the multimedia fanatics out there. Its huge AMOLED display paired with a large battery makes it the holy grail for people who indulge in YouTube or other content streaming platforms a lot.

And with the recent price drop, A70s does manage to make its mark as a viable mid-range smartphone. But again, if Samsung had gone with a better SoC like the SD 730G or even last-gen flagship Exynos chipset, it would have catered every audience, including the gamers. So, yes, if you are a hard-core gamer, I would still advise you to go with the K20 Pro, otherwise, the A70s ticks all the boxes for a good mid-ranger!