Home Analysis Which smartphone brands have honest pricing in Nepal compared to India? 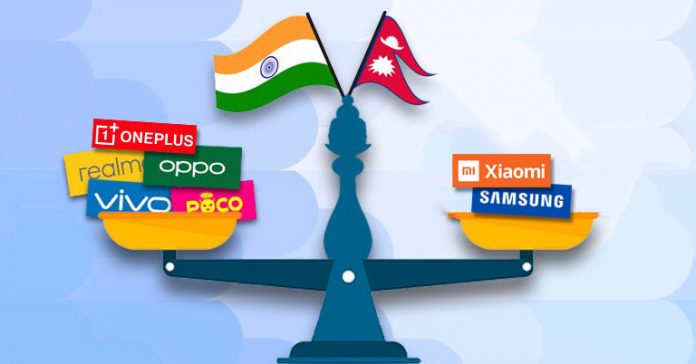 Sandwiched between two of the largest smartphone markets in the world, domestic buyers are usually disheartened to look at Nepal’s smartphone industry. From the lack of timely launches to straight-up unavailability, our market simply doesn’t enjoy the same treatment from vendors in our neighboring countries. But more importantly, the price difference in smartphones in Nepal and India makes the matter so much worse.

Smartphones price in Nepal and India:

Factors like cultural similarity and the open border directly contribute to this phenomenon known as “reference pricing” between Nepal and India. While China relishes similar (if not better) smartphone prices compared to India, the stark contrast in Nepal-China culture and the comparatively strict border means Nepalese are rather hesitant in importing phones from our neighbors in the north.

On the contrary, there’s even this relaxed notion of:

among many domestic customers. This is none other than because of the aforementioned “reference pricing” tendency. The term is pretty self-explanatory, but allow me to briefly elaborate on it regardless. Simply put, it involves comparison. Say product X costs $10 at store A while store B sells the same commodity for $12. As you can tell, there’s a clear & objectively superior choice of purchase between the two stores. Let’s put that principle to our topic of discussion.

While there are a few smartphone vendors that price their devices rather competitively here in Nepal, most of them fail to do so—in comparison to India. This ultimately triggers the said “बोर्डर गएर किनिन्छ” mentality. Well, not everyone will (or can) explicitly act on that. But as compensation, they will resort to the grey market seeking a more acceptable pricing model.

Consequently, it’s a major headache for the official importers as it directly contributes to a loss in their potential business. To counter this illegal import of smartphones and similar devices in the country, Nepal Telecommunications Authority (NTA) is finally gearing up to introduce Mobile Device Management System (MDMS). You can learn more about it here.

Anyway, coming back to the topic at hand, how do the official importers/distributors of smartphones treat their customers in Nepal in terms of the product price? While we’d like to believe all of them do the best they can, ultimately, we’re paying more than what our neighbors do for the same commodity most of the time. So today, we’ll be taking a look at a handful of midrange smartphones officially available in Nepal and India to look at which brands save face and which don’t.

From the table, we can see that OPPO, POCO, Realme, OnePlus, and Vivo’s phones fall victim to a higher price difference between Nepal and India. On the other hand, Samsung and Xiaomi’s offerings are much more digestible in regards to their relative price. But before making any further assumption, it’s important to understand that this solitary sample size is not enough to come to an objective conclusion.

However, we can paint a rough picture of how exorbitantly (or competitively) different smartphone brands in Nepal price their products compared to India.

A company’s pricing policy is also determined by factors including (but not limited to) operation costs, distribution network, market competition, and more. Also, not all these brands share a similar set of resources to warrant comparable pricing. But in the end, a buyer can’t afford to empathize with a brand’s lackluster business acumen for their unreasonable pricing. Let’s put the spotlight on our two main culprits: Realme and OPPO. Now, we already know that in the global arena, these two are sister companies. Despite sharing each other’s resources, Realme and OPPO cater to two distinct market demographics. Similarly, Realme and OPPO’s business are managed by the same firm here in Nepal too. While their product portfolio itself is pretty impressive, embarrassingly, their pricing is not.

As a result, they haven’t been able to break into the Nepalese smartphone market quite as much as the competition. Here, seeing Realme’s incompetence is more frustrating than disappointing. Even though its offerings rival Xiaomi’s smartphone lineup, because they have a laughably unreasonable asking price, there’s really not much of a competition between the two companies. But in India, their fierce rivalry facilitates buyers to enjoy better products at even better prices. Talking about Xiaomi, yes, they’re the king of value-for-money smartphones in Nepal—no doubt. The company has been revolutionizing the budget and mid-range segment in the country for quite some time. Yet, things could be better. You see, while Xiaomi India frequently introduces discounts, offers, and even permanent price-drops, this happens once in a blue moon here in Nepal.

Nepali OnePlus enthusiasts are left to sulk too. The company that (almost) single-handedly redefined what smartphone affordability could mean, doesn’t have the best track record in our country. Whether it’s about the flagships or the recent mid-range releases, OnePlus phones are way too expensive in Nepal. Even though the brand recently received a new distributor, things haven’t changed much.

On the contrary, Samsung’s pricing strategy has been commendable so far. Not just mid-range phones, its budget, premium mid-range, and flagship smartphones retail competitively—even compared to the global market. If the rumors are to be believed, the recently launched Galaxy A72 which starts at NPR 51,999 in Nepal, will cost INR 34,999 (= NPR 56,000) in India.

Because of the very same reason, Samsung phones rarely make rounds in Nepal’s grey market. More often than not, it’s the Chinese brands’ devices that see volumes of illegal imports. A recent sting operation from Avenues Khabar and Nepal Police revealed a large volume of said grey imports in Nepal’s biggest hub too.

To wrap it all up, even after the implementation of MDMS, the Nepalese smartphone market will see its comparison against that of India. While there are some companies that price their phones fairly, the current state of the issue demands major improvement. Only with this will MDMS find its true success in Nepal.