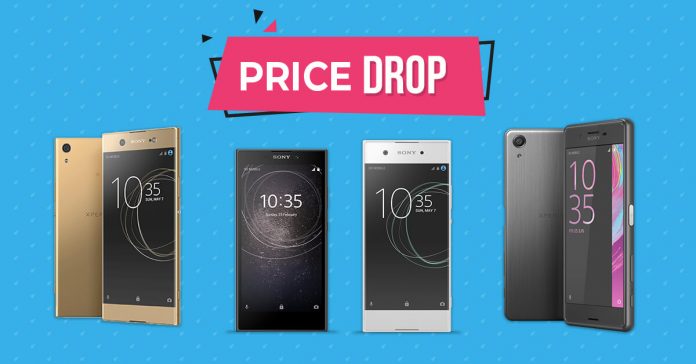 Sony smartphones are basically known for their awe-inspiring cameras. The Japanese tech giant always promises to cater more especially on the camera department, be it a flagship handset or budget-friendly devices. And the good news here is that the Same brand has slashed the price of four of its camera-centric smartphones. And at the new price, the smartphones pack plenty of punch.

When it comes to the display, the Sony Xperia X may not meet the today’s standard as it lacks bezel-less design and trendy 18:9 aspect ratio. Nonetheless, the 5-inch display on the device looks pleasantly sharp at Full-HD resolution.

On the performance front, the smartphone boasts Qualcomm Snapdragon 650 chipset coupled with 3GB of RAM. The chipset is rather old and is manufactured on 28nm architecture. Nonetheless, it is excelsior when it comes to the performance. It even outperforms the Snapdragon 625 chipset, which is found on smartphones like Xiaomi MI A2 Lite and Redmi 5 Plus. But the SD650 tends to get heat more when compared with the likes of SD625. Talking about the memory on the phone, there is 64GB of onboard storage. 64GB of storage is sufficient for most of the users. And considering the price, the amount of storage is quite huge as most of the smartphones at the same price bracket usually come with 16/32GB of storage.

In the camera department, the phone looks equally great. There is a 23MP rear camera and a 13MP camera, which are capable of capturing some jaw-dropping photos. Since Sony is an excellent player in the camera game, you can easily see its camera prowess here. So with all these amazing features, the Sony Xperia X is surely one of the best smartphones in Nepal under Rs. 20,000 of price.

The Xperia X also inherits the same 23MP rear camera, which was included in the Xperia X. And no doubt, the image quality will be any different here. Even on the front, there is a capable 8MP shooter.

On the display front, the big bezels on the top and on the bottom may be frustrating for the most. But when only the display is considered, the Xperia XA1 is one of the best phone out there. The device comes with Full-HD resolution at sub 15,000 price bracket, which is absolutely a rare feature. On the top, the display is shielded with Scratch-resistant glass. So even your smartphone slips or falls through your hands, there is a rare chance of cracks and scratches to appear on the screen. There is Helio P20 chipset on the performance front, which is paired with 3GB of RAM. Helio P20 may not be the best performer out there but considering the price, there is nothing to complain. But the presence of 2300 mAh battery may be not sufficient for everyone. So you might have to plug it to the wall charger quite often.

Although the presence of the outdated Android Marshmallow and a bulky body might not be that pleasing, the sharp display and capable cameras might interest you here. With the thickness of 9.8mm, the Xperia L2 looks really bulky and unappealing. And there is nothing much interesting about the phone except its cameras. So if you are looking for a decent camera phone at the price of Rs. 15,000, you can have the Xperia L2 as an alternative.