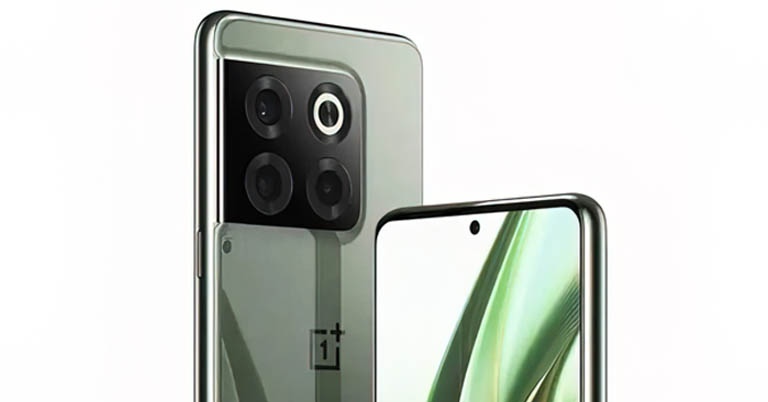 OnePlus is reportedly working on a new flagship smartphone called the OnePlus 10T. This is rumored to feature Qualcomm’s current best Snapdragon 8 Gen 1+ SoC. In this article, we will go through the leaks and rumors surrounding the OnePlus 10T along with its specifications and features.

OnePlus 10T’s rumored design is similar to that of the OnePlus 10 Pro. OnLeaks and SmartPrix have collaboratively leaked the design which shows a wraparound camera housing on the rear. Though there are minor alterations to the camera module, with the LED lens being located on the upper camera row. The device also lacks an alert slider, as seen in the design.

Moreover, as this is a less expensive alternative to the OnePlus 10 Pro, the company might use plastic back this time around. The phone is also rumored to be available in three colorways—White, Black, and Light Mint.

On the front, the 10T will flaunt a 6.7-inch OLED screen with Full HD+ resolution and 120Hz refresh rate. It will be a flagship-grade 10-bit panel with an in-display fingerprint scanner.

The smartphone is believed to ship with a Qualcomm Snapdragon 8 Gen 1+ chipset. This mobile silicon is built on TSMC’s 4nm process and brings gain over the Snapdragon 8 Gen 1 in terms of performance, thermal efficiency, and battery life.

It will be paired with up to 12GB of RAM and 256GB of storage. OnePlus will be offering the phone a 4800mAh battery that will be fueled by 150W fast charging. Over on the camera front, it is likely to feature a 50MP primary lens, 16MP ultrawide, and a 2MP macro sensor on the back. And, as things currently stand, the 10T is unlikely to get a Hasselblad camera optimization. Similarly, there will be a 32MP lens for selfies.

As for the pricing, a recent listing on Amazon UK listed OnePlus 10T for USD 799. The page has been removed as of now; but it confirms the phone’s key specs like Snapdragon 8+ Gen 1 SoC, an AMOLED display with a refresh rate of 120Hz, and a 50MP triple camera setup.

While the company has not yet officially announced a release date, reports suggest that it will most likely be released next month.