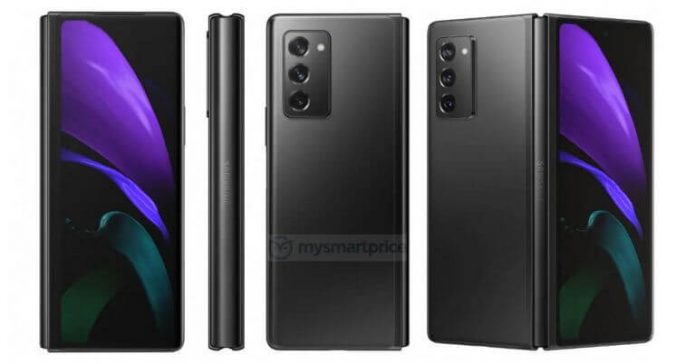 Last year’s Galaxy Fold was a sort of experiment in the field of foldable phones. The idea was an innovative one but the phone faced a lot of durability issues. Its launch was postponed multiple times because of Samsung’s inability to solve all the problems. Samsung will likely avoid those situations with its successor. As you may have already noticed, Samsung has tweaked the naming scheme to include the Fold 2 in the Z series. The Z series will be Samsung’s lineup of foldable smartphones. There are already two devices under the Z lineup – Z Flip and  Z Flip 5G.

Earlier there were rumors suggesting that Samsung will adopt an in-display camera on the front of the device. However, the claim has been proven wrong as the leaked renders of the phone show off a punch-hole display. It’s a shift from the notched display on the original Fold. Samsung has gone with the same book-style folding design. When unfolded the Super AMOLED screen will measure 7.7-inch. Similarly, the cover display will measure 6.23-inch. We expect Samsung to use UTG technology for durability.

The device will feature a metallic build. The rear panel of the Galaxy Z Fold 2 looks strikingly similar to the rumored Note 20 Ultra because of the rectangular camera module.

The Z Fold 2 will have an upgraded processor as well. Everything points to the latest Snapdragon 865/865+. The Plus variant is the latest flagship processor from Qualcomm and comes with a higher clocked Prime core compared to the SD 865 that was used in the S20 series.

The device will flaunt a triple camera setup on its back. Its three cameras are arranged vertically inside the rectangular module, along with an LED flash. The module has a significant bump compared to the rear surface. Rumors suggest it will feature 12MP primary camera, 64MP zoom camera, and 12MP ultra-wide-angle sensor. On the front, there will be a 10MP selfie camera.

Galaxy Z Fold 2 is likely to feature a 4,356mAh battery (dual cell) with support for 15W wired fast charging capability. Similarly, the device will also support 15W reverse wireless charging. While 5G connectivity is certain, we will have to wait to see if it will support the faster mmWave or users will have to settle with the sub-6Hz network as with the Z Flip 5G. The device will be available in two color options – Mystic Black and Mystic Bronze.

Xiaomi Redmi 9 launched in Nepal with Helio G80 and quad-camera...