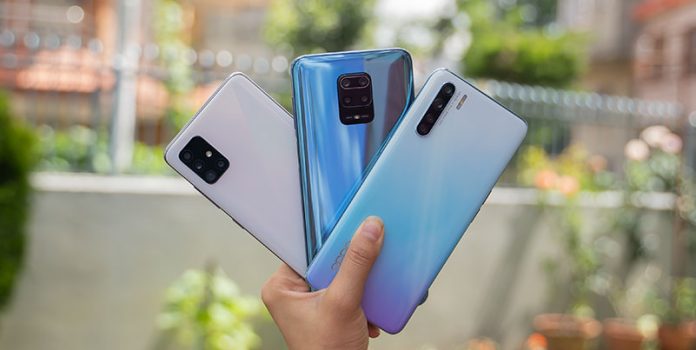 Flagships and flagship killers are great since they offer tons of amazing features. But the reality is, not everyone can afford such high-end devices. So we are often obliged to get a midrange smartphone for ourselves. While many of us may share a similar feeling, here, I will be trying to make your choice a little easier by compiling all of the best midrange smartphones in Nepal.

To make it easier for you, I have compiled the list in the order of best to the cheapest one available. These phones have been compared based on their performance, design, camera, durability, and price. And just to be clear, by midrange phones we mean those smartphones that cost between 30K to 40K. So buckle up and lets dive into our list of the best mid-range smartphones currently available in Nepal. 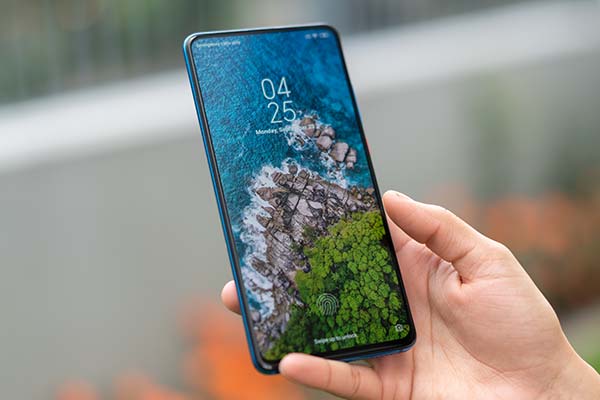 The Redmi K20 is a toned-down version of the K20 Pro. It has the same glass-metal construction and an edge-to-edge 6.39” screen with Super AMOLED display and Corning Gorilla Glass 5. Furthermore, it has a triple camera setup on the back. It consists of a 48 MP primary sensor with a 13 MP ultra-wide lens and an 8 MP telephoto lens. Moreover, the front camera is a motorized pop-up camera of 20 MP.

Now, I know that this device is already a year old, and how no earth is it still considered the best midrange phone. Well, let me tell you that despite its “age”, it is still an excellent phone. The 6.39-inch AMOLED display is immersive and is produces vibrant output. Similarly, pop-up camera, though some might not like it, I think that it is a much better alternative than a notched or a punch-hole display.

Under the hood, the device is powered by the Snapdragon 730 SoC. The chipset, during its release, was considered as one of the best midrange chipsets from Qualcomm. And almost a year later, it still holds. It will not give you flagship-level performance, but it is great nonetheless. Furthermore, its camera setup is good too. The Sony IMX582 primary sensor is capable of capturing a brilliant image. However, its 4K recording is limited to just 30fps. So, that might be of problem for some. Also, its telephoto lens of 8MP can come in handy while capturing distant subjects. 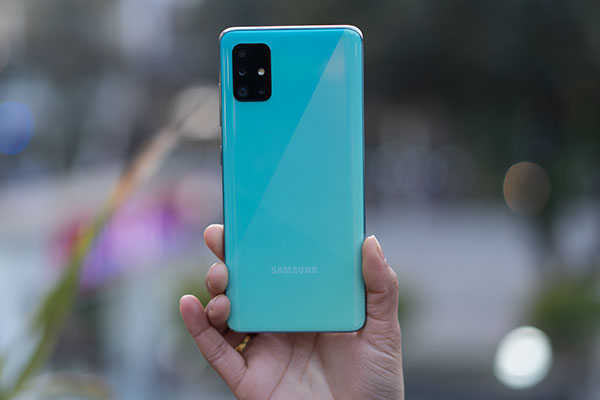 Now, this entry might not surprise many because the Samsung Galaxy A51 simply is the best midrange camera phone right now. The main 48MP lens captures punchy images with excellent details. Furthermore, its 12MP wide-angle lens produces sharp images. The portraits are also excellent, thanks to Samsung’s software optimization and a dedicated 5MP depth sensor.

However, it excels in some other areas too. For instance, its design is picture-perfect. The device is light, thin, and yet ergonomic. And despite being “glasstic”, the device is sturdy as a metal. Furthermore, its 3D-holographic cut design on the back is amazing and the L-shaped placement of rear camera looks elegant too.

If its design on the back is breathtaking, then I don’t have a word to describe its screen. It is a 6..5-inch Super AMOLED screen, which in my opinion is the best out there. It has got thin bezels surrounding the screen and its got a tiny punch-hole to add to its elegance. And the display offers great color and contrast.

However, one thing that might disappoint you is the performance of the device. Given its rather hefty price tag, the performance could have been a lot better. A better chipset than the Exynos 9611 and the Galaxy A51 could have easily been at the top of this list. 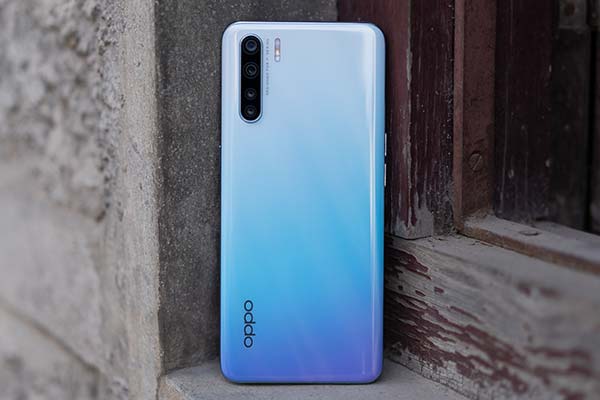 The third entry on our list is the Oppo F15. The F-series has been Oppo’s success-mantra here in Nepal, and the F15 doesn’t disappoint either. In many ways, the Oppos F15 is comparable to the Samsung Galaxy A51. They both have a similar light-weight and ergonomic design. But Oppo edges out the Galaxy A51 with its blue colored variant in terms of the looks.

Similarly, their cameras are quite comparable too. Both have a quad-camera setup on the back with a 48MP primary lens. Similarly, with the Oppo F15, you do get a 6.4-inch Super AMOLED display with a very fast in-display fingerprint sensor.

Furthermore, it packs in a 4000mAh battery that provides good endurance. And thanks to the 20W VOOC fast charging, the phone charges up pretty quickly. Performance-wise though, the Helio P70 chipset will give you a decent performance similar to that of the A51. 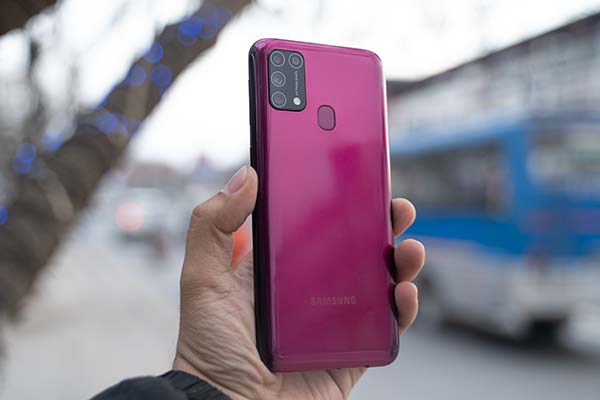 Its polycarbonate back and the plastic frame does not give out a good vibe. And it does not look that much sturdy either. Similarly, despite having a Super AMOLED display with FHD resolution, Samsung has not provided an in-display fingerprint sensor on this one. But that might be the part of the cost-cutting.

That being said, the camera is comparable to that of the A51. It has a 64MP primary lens that performs better than that any phones at the price range of Rs. 30,000. However, as mentioned earlier, A51’s ultra-wide lens is quite unbeatable and M31’s is not up to the task either. Galaxy M31 uses the same Exynos 9611 chipset, so performance-wise both the devices fall on the average category.

The best thing about this device is its huge 6000mAh battery. That’s quite outstanding. I mean the battery backup on this device is simply great. However, it will take you a significant amount of time to charge up the battery as it only supports 15W charging. 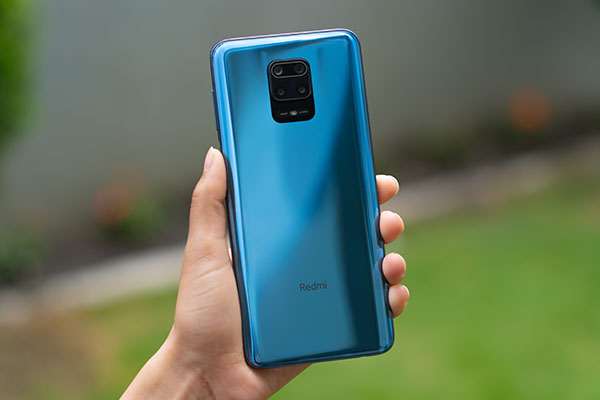 The final entry on our list is the Redmi Note 9 Pro. It is the cheapest entry on our list. However, don’t let its price tag fool you as the device offers one of the best value for money performance. A balanced device is what best sums up the quality of the Redmi Note 9 Pro. Its design is not spectacular but it isn’t an eye-sore either. Upfront it has an IPS LCD panel with FHD+ resolution. Moreover, the display has a punch-hole to house the selfie camera. And I think it is great, especially considering the price range.

The quad-camera setup with a 48MP primary lens kind of a hit and miss thing. It does not do as good a job as the M31, but it is capable nonetheless. Most importantly, it gets the job done. Under the hood, it operates on the Snapdragon 720G. Although it’s not as fast as the Helio G90T found on its successor, the 8nm based 720G offers better battery efficiency and less thermal heat. Similarly, its 5020mAh battery means the device has great endurance. The device supports 18W fast charging.

What do you think of our list for the best midrange smartphones in Nepal, or do you want to add something to the list? Have your say in the comments section.

Samsung Galaxy Note 20 Ultra: Everything You Need To Know