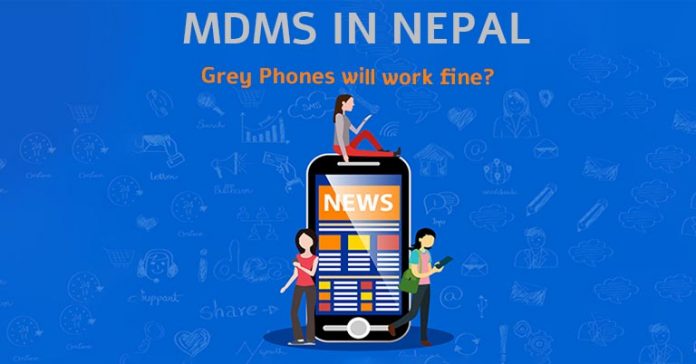 As the government has announced the implementation of the Mobile Device Management System (MDMS) in Nepal, there has been a widespread assumption that phones purchased through grey channels will not work. However, that is not entirely the case. Even after the system goes live from Shrawan 1, phones purchased from India/Dubai/US, or imported as gifts, and through other grey channels can continue to function normally. Here, we’ll be discussing the effect of MDMS on the existing grey phones in Nepal.

The government and Nepal Telecommunication Authority (NTA) have clearly initiated the implementation of MDMS to diminish grey channel infatuation. This will definitely assist the economy of the country to flourish since legally imported phones will contribute to 13% VAT and 2.5% excise duty.

Moreover, as the grey market diminishes, more job opportunities will be created in the mobile sector which will further boost the economy of the country. Before we go any further, let’s understand why the grey market exists in Nepal.

Reasons why the grey market exists

There are certain factors that ultimately made many of us (as a consumer) opt for smartphone imports via unofficial grey channels. The first and foremost reason has to be the overpricing of most phones that arrive in Nepal. And because we share an open border with India where the prices are lower, Nepalese are directly motivated to purchase from a grey channel.

The delayed launch comes next. Compared to our neighbouring countries and the western market, smartphone companies launch their devices pretty late here. For example, the iPhone 12 series officially arrived in Nepal two months later as compared to the US and India. So, domestic smartphone enthusiasts don’t get to play with the newest gadgets quite on time. And once again, we’re left to look at the grey market.

The third reason why the grey market exists is that some of the products don’t launch here in Nepal. And most of them are usually valued-oriented smartphones with an exceptional price-to-performance ratio. Hence, customers are tempted to buy such devices.

For example, Xiaomi’s Mi 10i didn’t launch in Nepal but sold in thousands of units via the grey channel in the country as it offered great specs at a mid-range price (5G Snapdragon 750G, 120Hz display, 108MP camera under Rs. 35,000).

Here are few recently launched excellent phones that are available in the global market but didn’t arrive in Nepal:

Disadvantages of MDMS: The worst-case scenario

Following the implementation of MDMS, smartphone brands in Nepal can decide which model to launch and which not to. Plus, they now have 100% control over their price. As a result, no matter what, buyers will have to settle among the available phones—which may have exorbitant pricing. This could create a closed and monopolistic market where the customers will ultimately suffer the most.

On the other hand, the government hasn’t released a detailed blueprint outlining how the system works for grey devices. Consider the following scenario: someone arrives in Nepal and brings a handset as a gift, or tourists have their smartphone purchased in their own country. Is the system worth it if they are unable to use that particular device? Certainly not. So, the government should institute an appropriate procedure to get the gadget authorized for usage in Nepal.

Advantages of MDMS: The good stuff

While we have discussed the downsides of MDMS, there are also beneficial components to them.

One of the primary reasons for imposing MDMS is to ensure that the government collects the allocated tax (13% VAT and 2.5% excise duty) from every phone that enters the country officially through national distributors (importers). If the device is purchased in Nepal via official channels, the buyer directly pays all taxes and other add-on costs.

However, phones bought on the grey market are exempt from this requirement. So, since the system will abolish the import of phones illegally, that will directly result in an increased volume of legal imports. And this will ultimately help the government regulate smartphone import taxes to the proper extent.

Following that, the handsets purchased on the grey market will not have their IMEI number registered in NTA’s database. If your phone gets lost or stolen, the authorities will be unable to locate it. But that won’t be the case for phones that arrive through the official channels.

So, what if your existing phone(s) is from the grey market?

Before you start to panic, don’t. Even if you bought your phone from unofficial channels, it will continue to function as it is now—on one condition. You should compulsorily register your device in the NTA database to avoid any future complications.

All the strategies that NTA has in the works to reduce the effects of the grey channels in the country are commendable. However, as there are two sides to every coin, the responsible authority should also endeavour to resolve the contradictory scenario we outlined above.

The government of Nepal should also think from the consumer’s point of view and assure us believe that this is indeed a fair implementation. They could perhaps impose a nominal amount of TAX to buyers who opt to use mobile phones bought from abroad. For example, if a relative or a friend gifts me an iPhone 13 which has been imported from the US, there should be a provision of a certain fee to whitelist such phones.