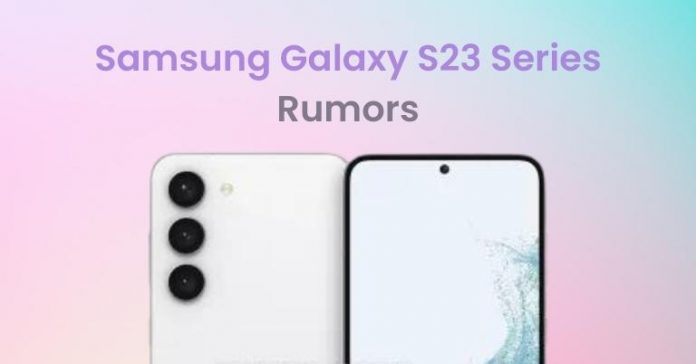 As per the 3C listing, both the Samsung Galaxy S23 and S23 Plus will be compatible with the same EP-TA800 charger. The vanilla Galaxy S23 has the model number SM-S9110, while the Plus model’s model number is SM-S9160.

Both the phones are Chinese variants and we can expect the international variants to pack higher charging speeds. Previously, the Galaxy S23 Ultra also made its way into the list with 25W charging.

As per new leaks, the Samsung Galaxy S23/S23+ will get an S22 Ultra-like redesign. Unofficial renders from OnLeaks give us a look at the upcoming phones with discrete camera bumps for each camera lens. If the renders are accurate, we will not be seeing the iconic Contour Cut camera design we saw on the Galaxy S21 and S22 phones. It looks like Samsung is keeping the center punch hole but some rumors hint toward thicker bezels. On the contrary, the 6.1″ screen on the S22 and the 6.5″ one on the S23 Plus will be making their way onto their successors.

Moving on to performance, the Snapdragon 8 Gen 2 seems like the most sensible processor selection for the upcoming Samsung Galaxy S23 series.

The Samsung Galaxy S23 Ultra is expected to be the first Samsung phone to boast a 200MP sensor. As per recent rumors, Samsung will use the unreleased ISOCELL HP2 sensor on its upcoming flagship.

The same leaker “100% confirmed” that the phone will ship with a 200MP camera with 0.6μm pixels, and a larger aperture of f/1.7 to capture more light. As for the selfies, the S23 and S23 Plus are expected to come with a 12MP selfie shooter marking the first resolution upgrade since the 2019’s S10.

As for the secondary cameras, the S23/23+ could feature a 10MP telephoto camera and the Ultra could keep the old 10x optical zoom system as well.

The launch date and price of the Galaxy S23 phones are not official yet. In addition, the current information available should be taken with a grain of salt as they are just rumors.