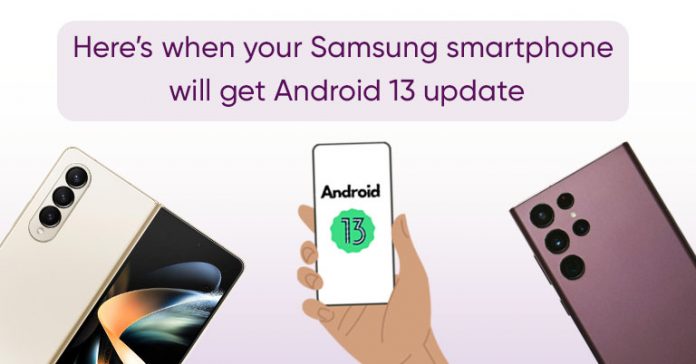 Samsung plans to release public builds of One UI 5.0 based on Android 13 before the end of the month. The manufacturer launched the One UI 5.0 Beta program for the Galaxy S22 series two months ago. Continue reading to learn more about the Android 13-based Samsung One UI 5.0 update.

Samsung has already released the stable One UI 5 updates (based on Android 12) to the S22 series. The company has now confirmed the update for the rest of the Galaxy lineup.

According to Samsung, the new software update will be available in November for the majority of its high-end phones and tablets. Older flagships and mid-range Galaxy devices receive the OneUI 5.0 update in December. The remaining mid-range devices will be updated to OneUI 5.0 in January 2023.

This One UI 5 update roadmap is for South Korea and thus includes some Korea-exclusive devices. However, global users can take it as a reference. Devices not listed above but eligible for the update will get the update in the first two quarters of 2023.

Samsung discussed the new version of One UI at large during its annual SDC (Samsung Developer Conference event). Nearly two months after Android 13 made its way to the Android Open Source Project (AOSP), the smartphone manufacturer is officially launching One UI 5.0 update for its Galaxy devices.

Android 13 is a relatively minor update over Android 12. However, with the One UI 5.0 update, Samsung is bringing a few of its own customization features to the platform. One of the most noticeable changes in the new OS is the revamped lock screen. It now supports new clock styles as well as video wallpapers, among other things. Users will be able to edit these directly from the lock screen, much like with iOS 16. The brand is also adding Stacked Widgets support, which allows users to place multiple widgets on a single home screen and navigate through them. Samsung has also improved the animations, quick toggle area, and notification customization with the One UI 5. Users will also be able to customize call background effects for specific contacts.