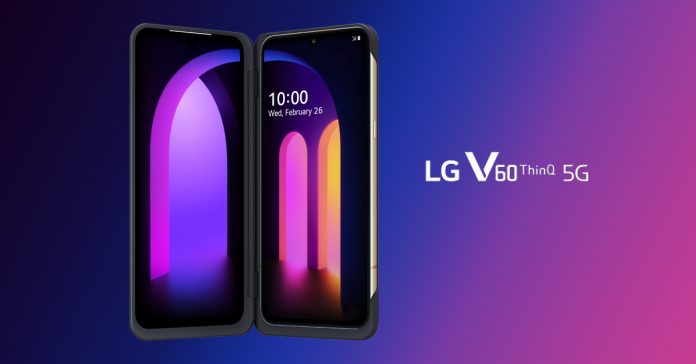 “Contrasting the mainstream smartphone trends while still delivering an optimal smartphone experience.” What company does that, do you think? If you ask me, LG and Sony fall into that category. Each year, they come out with some exceptional smartphones with a great many exciting features. But at the end of the day, they all fall victim to poor marketing and thus is never the first choice of the average consumer. That’s kind-of justified as well since, for a similar price, other popular OEMs are offering a lot more as per the changing demands of the market. It doesn’t mean LG & Sony’s phones are trash, absolutely not; just that everything considered, they certainly do lag behind. Well, Sony’s already kicked off its 2020 smartphone campaign with the new Xperia 10 Mk II, 1 Mk II, & the crown-jewel – the Xperia PRO. And LG has now come aboard the launch-train as well with its new V60 ThinQ; its first flagship phone of 2020.

LG’s V-series has always been primarily about innovation in terms of cameras & audio among other aspects of a smartphone. But with last year’s V50 ThinQ, the company gave-in to the additional productivity bandwagon with a separate display, in the form of a detachable cover. Thankfully, the V60 ThinQ also comes with the case, alongside some software improvements this time around. So let’s talk about them first.

While companies like Samsung & Huawei are going out of their way to manufacture a folding display that needs to be handled like you would a child with osteoporosis, it’s certainly not how I’d envisioned how foldables would be. A seamlessly extended display is great and all, but the constant fear instilled in the user takes all the fun away.

Hey, what about two separate yet conjoined displays in a phone?

That could work, yes. Obviously, it’s nowhere near the same experience as the fluid foldable displays we’ve seen on the Samsung Galaxy Fold, and the new Huawei Mate Xs. The idea was first introduced by ZTE with its Axon M, with its dual foldable display attached with a hinge. LG improved upon the idea but turning the second display into a separate case that you can install and take off at will. So far, we’ve seen this implementation on the V50 ThinQ, and G8x ThinQ. The display on the case mimics the primary display in terms of size, aspect ratio & everything, while there’s also a small cover display out on the front. The secondary display’s hinge can be arranged in the form of a laptop, where you can open separate apps on two screens, or use them concurrently. Though the latter was limited to some LG apps only, the company has worked with Google to fluently utilize the dual-display on some of its apps like Maps, YouTube, etc. And if you’re into gaming, you can have the second display turned into a gamepad for that Nintendo DS experience.

Here, the primary screen on the V60 ThinQ is a 6.8-inches FHD+ P-OLED panel with 100% DCI-P3 coverage & HDR10+ support. However, this one has the “standard” 60Hz refresh rate, while we’re expecting almost every flagship and even many mid-range phones to come with 90Hz or higher refresh rate. Moreover, the LG V60 ThinQ has ‘U’-shaped notch for the front camera, which in my opinion, should’ve been replaced with a punch-hole cutout, or a pop-up mechanism as it simply doesn’t complement the “flagship” experience in 2020.

More on the design, the phone is protected by Corning’s Gorilla Glass 6 on the back while the display is secured by Gorilla Glass 5. Its frame is made of metal and still retains the IP68 rating for dust & water resistance. Similarly, the triple rear-cameras are placed horizontally like on the Galaxy S10+.

On to the cameras, there are three sensors on the back like V50 ThinQ but LG has terminated the telephoto lens here. Instead, you get an improved 64MP primary sensor (that shoots 16MP pixel-binned images), a 13MP ultrawide sensor, and a 0.3MP ToF 3D sensor for depth sensing. Besides photos, LG’s V-series has been known for its superior videography prowess in every iteration of the phone. And the V60 ThinQ doesn’t disappoint. First and foremost, you can now shoot 8K videos. Besides that, there’s a dedicated ASMR mode, and the 4-channel microphones on the device allow for a wider range of audio capture. Similarly, the “Voice Bokeh” feature helps isolate the background noises from what the subject is actually saying. Coming to the front is a 10MP selfie shooter inside the aforementioned notch.

Being a flagship phone that it is, the LG V60 ThinQ also comes with the latest hardware underneath. The phone is powered by Qualcomm’s Snapdragon 865 chipset, thus making it a 5G-ready phone. However, it only supports the sub-6GHz spectrum of 5G in major US carriers, while the faster mmWave 5G is only supported by Verizon.

Click here to learn more about the two spectrums of 5G connectivity.

Getting to the memory, the phone comes in a single 8/128GB configuration though you can expand the storage using a micro SD card. However, the internal storage on V60 ThinQ still relies on the older & slower UFS 2.1 protocol, while there are already phones with a much faster UFS 3.1 storage on the market. The phone runs on LG UX 9.0 on top of Android 10.

Yes, you read that right. While even Samsung has skimped on it in its new flagship phones, LG knows just how important the headphone jack is. The phone has 32-bit Quad DAC for a superior wired audio experience. Furthermore, the phone borrows the 3D Sound Engine technology from LG’s OLED TV lineup that delivers optimized audio depending upon the content via its stereo speakers. And because the back is made of glass, the phone has wireless charging capability as well.

Yeah, you’re right. Because the second display is powered by the phone itself, that may be worrisome. However, you can detach it when you don’t want it and more importantly, both displays are a regular 60Hz FHD+ panel.

As of now, the exact price of the LG V60 ThinQ is unknown. However, LG has announced that the phone will cost less than the new Samsung Galaxy S20, which goes for $999 (Rs. 107,499 in Nepal). We expect the phone to release within the next couple of weeks.

Check out our review of the ASUS ZenBook Pro Duo!