Home Google Pixel Upcoming smartphones of 2019: What can we expect this year? 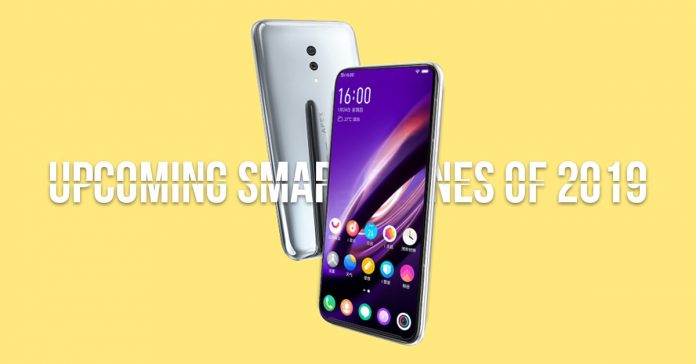 Smartphones aren’t just a necessity, but a part of our lives, for the better or for worst. There is really no other piece of gadget that tends to excite the masses. The money, research, development, and attention that goes to these devices are outstanding, and unlike anything, we have seen before. So, it’s only natural to get excited about what the best and brightest manufacturers have in store for us.

Right off the bat, they will be releasing two of the most anticipated smartphones of 2019. The first is their Galaxy S10 Trio, which we know almost everything about. The phones are set to launch on February 20, right before MWC. The other is none other than the Galaxy Note 10, which like every year is expected to dominate the second half of 2019. Both phones carry huge expectations from the users, shareholders, and reviewers in general. They have already kicked off 2019 with a few models from the M-series. And the same will continue throughout the year more from the M series, a few from the A-series, the 5G enabled S10+ and possibly a foldable smartphone soon. Samsung did change its patterns and trends to meet the market demands, so we will have to wait and see if they come up with more exciting stuff.

Sony has been in the rumor mill quite a lot lately. Be it them axing their compact lineup, their failing smartphone business or getting dumped by retailers and carriers. Either way, their phones in past weren’t exactly great, to begin with, either. But now, things are seemingly beginning to look up, at least the Xperia XZ4, which seems a lot promising. The phone sports the SD 855 SoC, 6GB of RAM and 128GB of expandable memory. It also gets a 4400mAh battery and a tall 21:9 AMOLED display up front. But the show stealer remains its 52MP f/1.6 aperture sensor, along with a 16MP telephoto lens and a 0.3MP ToF sensor. The pricing remains undisclosed, and the phone will also not go not sale before mid-summer even with an early MWC launch. As for the rest of 2019, Sony’s future remains in the dark. HMD Global is preparing the launch of their newest flagship, the Nokia 9 PureView. It is all but confirmed to come with a five-camera setup at the back. Ignoring the fact that it just looks disgusting in the renders, the Nokia 9 will also come with a 5.99″ punch hole display. The phone will run on Snapdragon 845 instead of the 855, the later is said to release later this year. The flagship will be followed by the Nokia 6.2 2019 and possibly a few others. One of which could be a refresh to its iconic feature phone. HTC has stayed pretty much quiet in 2018, but we have a few rumors hinting at a new smartphone launch from the company. It won’t be a flagship, the HTC U13 or whatever they end up calling, that will come out later this year. They are, however, refreshing their HTC U12 Life with more RAM and storage options among other improvements. The company has claimed to come up with more smartphones in 2019 but failed to mention what we could expect.

LG G8 or the LG V50 ThinQ will launch this February 24, on the first day of MWC 2019. Though we are just spitting out the highly likely scenario, the video above does help. Going by the “goodbye touch”, it definitely feels like LG is bringing something new to the scene. Rumors have it that it will feature the Snapdragon 855 SoC, vapor cooling chamber, 4000mAh battery and a 4K LCD sound emitting display. As you have already guessed from the image above, Huawei is launching a foldable smartphone at the MWC this year. And yes, the same phone will also come with 5G connectivity, as confirmed by Huawei itself. Moreover, the Huawei P30 could also make its way to this year’s MWC 2019. This one is rumored to feature the Kirin 980, three or four camera setup and an in-display fingerprint sensor. We know when the OnePlus 7 is launching, maybe not the specific dates, but definitely somewhere in the month of May. Besides that, they are bringing a new smartphone, it may just be the OnePlus 6T but with 5G enabled. We are also not sure if it’s the OnePlus 6T, all we know is the phone OnePlus is about to announce at the event will come with 5G. Also, it won’t be cheap either, thanks to the 5G premium it will be carrying. Yup, Motorola Razr V4 foldable smartphone might make its way to the MWC this year. It’s not confirmed yet, but the phone was rumored to launch in February, so why not in MWC. Details on the phone remain a mystery, other than it’s foldable nature. What we can say for sure if it’s going to be an expensive phone, for sure. They are hosting an event on February 7, in Brazil and it’s highly likely the new G7 series will launch then. Finally, OPPO is also set to announce a foldable smartphone at the MWC 2019. Most OPPO smartphones never make its way out of its home country, but this might be an exception. It’s rumored to go available worldwide, though specifics are yet to be revealed. Other rumors hint at an OPPO phone with that 10x optical zoom lens to go official soon, alongside its F11 series. We could also see a Find X successor this year as well, rumored to be named the OPPO Find Z.

Vivo Apex 2019 was announced a few weeks ago, with a full display fingerprint sensor and 5G connectivity. While that may just be a concept and might not ship, ever, the phone sports flagship grade internals and builds on the same minimal design. We can also expect to see the Vivo V15 and V15 Pro really soon, along with a few smartphones from the Y series. Xiaomi has a plan of its own, broadening its product category into larger geography. In a statement from the company’s CEO, he said: “Only by winning in China, can we win in the rest of the world”. The company plans to regain its number one position in China within ten quarters, which started by the first quarter of 2018. With that, we should see the second iteration of the Pocophone alongside the MI 9, MI A3, MI Mix 4 and a foldable Xiaomi smartphone. Furthermore, the rest of the smartphones from the Redmi 7 series should go official in the coming weeks as well. The iPhone XR, XS, and XS Max were launched back in September last year, and we can expect the same from them in 2019 as well. While their innovation has taken quite a hit, we remain optimistic about their next flagships. Their sales have been uninspiring as well, countering which, the iPhone X seems to have made a comeback. The 64GB variant of the iPhone X is currently available in their refurbished section for $130 less. With all this happening, don’t be surprised if the iPhone makers come up with another new smartphone mid-2019. Google’s Pixel 3 duo was a hit for the minority and a miss for the majority. Flawed with endless hardware and software bugs, the device failed to gain much momentum. However, its cameras were unmatched and the UI experience was highly loved. The same features should carry on to their new Pixel 3 Lite XL.

The phone was recently leaked sporting an octa-core Qualcomm Snapdragon processor. Their launch dates pricing will be revealed soon, but going by the rumors, they will carry a reasonable price. As for the Pixel 4 family, we will have to wait till October.